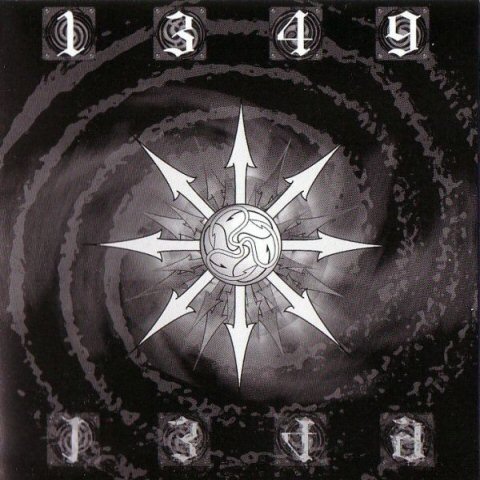 Oslo’s black metal act 1349, named after the year the plague hit Norway in the 14th Century, evolved from the demise of Alvheim. Their debut was this self titled EP from 2001. It includes a live rendering of Celtic Frosts ‘The Usurper’. Drums on this EP was done by the revered figure of Satyricons Frost. The band might be best known for their speed and brutality and this EP is one of their better releases, its fast, its extreme but these are not the only qualities in these songs, this EP is much more than that, it’s a perfect example of very good black metal. The songs are very good, full of atmosphere created by the rawness of the production and some fast drumming with outstanding distorted guitar riffs. If you think that this is one of those bands who only play fast and nothing else then you’re wrong, the songs mostly consist of lots of fast parts but there’re some mid paced black metal parts in a few songs that adds the flavour to the speed when it reappears. The vocals are typical black metal shrieks and have been omitted in the usual Norwegian black metal style. The lyrics are full of hatred, they’re not cheesy and they’re really good if you look at them for a misanthropist’s perspective. The guitars have been played in traditional black metal way, short, fast and distorted riffs create really great atmosphere when combined with very impressive drumming by Frost. They might be seen as an ordinary black metal act but the tone/sound to them is just unique. Many bands speak of being evil but 1349 doesn’t need all of that. 1349’s music speaks for itself.

Track listing:
1. End Of All
2. Antichrist Warzone
3. Chaos Within
4. The Usurper-live-Celtic Frost cover