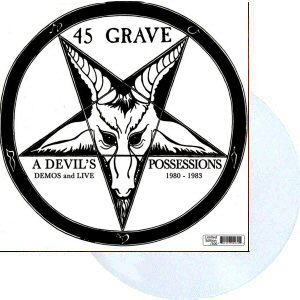 During 1979-1990 in Los Angeles, the band 45 Grave was born in the chaos of the Punk movement and churned out their own brand of Ghoul Rock that later was labelled the Deathrock / Gothic genre. 45 Grave became a fixture on the Los Angeles punk scene in the early 1980s and they disbanded in 1985, but re-grouped (with a mostly new line-up) in 2004. The “A Devils Possessions” commemorates the band’s revival by collecting rare demos and live tracks from between 1980 and 1983, capturing the band’s edgy, mercurial energy when they were at their peak. It’s all here: the creepy but tongue-in-cheek deathrock themes, the grand sweep of punk’s early experimentalism, and Dinah Cancer’s chilling vocals on cuts like “Violent World,” “R2D2 Is Buddha,” and perhaps the group’s best-known tune, “Party Time.” (The remix, which appeared in the film Return Of The Living Dead, is included here too.)