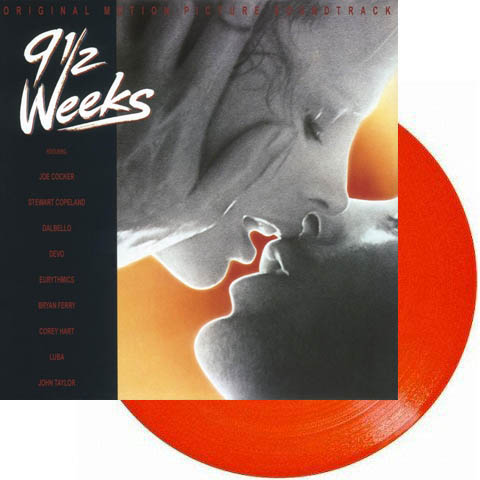 Every Valentine’s Day video stores and online rental outlets are swamped with requests for the film this soundtrack represents. It stars young Kim Basinger as a New York City art gallery employee who has a brief yet intense affair with a mysterious Wall Street broker, acted by Mickey Rourke. Considered too explicit by its American distributor and was cut for U.S. release, even then the film was a box office bomb in the U.S. However it became a huge success internationally in its unedited version, particularly in Australia, Canada and the United Kingdom. It has acquired a large fan base on video and dvd and developed a cult following. The main single released from the 9 ½ Weeks: Original Motion Picture Soundtrack was “You Can Leave Your Hat On” performed by Joe Cocker. The hit track “I Do What I Do”, performed by Duran Duran bass guitarist John Taylor is the title track of the film. It gave stage for his first solo singing performance during a hiatus in Duran Duran’s career. The song reached #23 on the Billboard Hot 100 and #42 on the U.K. Singles Chart. The soundtrack also included tracks from Luba, Bryan Ferry, Dalbello, Corey Hart, Devo, Eurythmics and Stewart Copeland, whereas the music has been a great influence on the cinematic of certain scenes in the film.