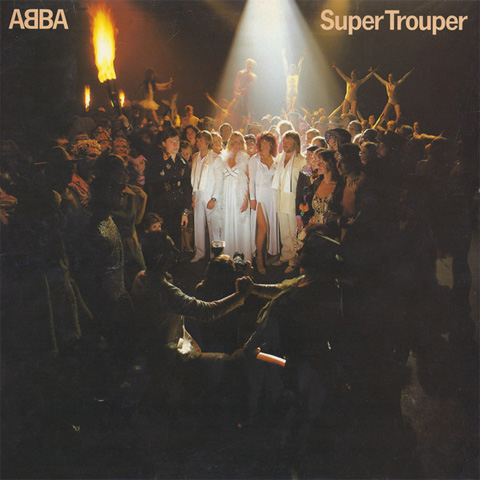 Commercially, Super Trouper, ABBA’s seventh album, was another worldwide blockbuster. “The Winner Takes It All,” its lead-off single, released several months in advance of the album in most territories, was a smash; for example, it was the group’s 14th consecutive Top Five hit in the U.K. and their eighth number one there. The title track was also a British chart-topper (their last), as was the album, their sixth. “Lay All Your Love on Me” made the U.K. Top Ten, and “On and on and On” was released as a single in some countries, hitting the Top Ten in Australia. Musically, Super Trouper found ABBA, always trend-conscious, taking account of the passing of disco and returning to the pop/rock sound typical of their early albums. Only “Lay All Your Love on Me” employed a dance approach. The title song had the kind of martial beat and pop sound more in keeping with the group that had broken through with “Mamma Mia” and “S.O.S.,” and “On and on and On” paid homage to one of their chief influences, the Beach Boys, with an arrangement reminiscent of “Do It Again.” Lyrically, there was a distinct sense of world weariness and melancholy, from the divorce lamentations of “The Winner Takes It All” to the dissatisfaction with touring expressed in “Super Trouper” and even the nostalgia for a simpler time in “Our Last Summer.” For performers on top of the world, the members of ABBA were putting an unusual amount of what sounded like real unhappiness into their pop music.