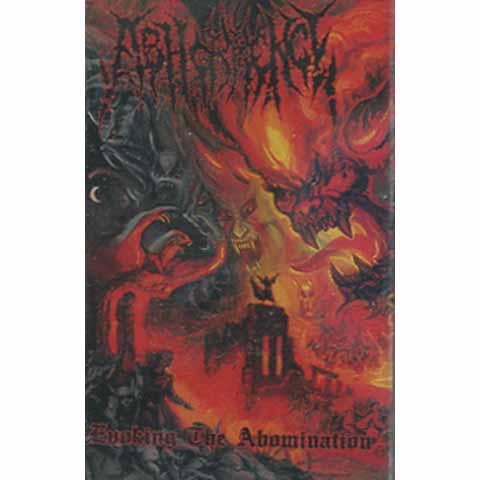 Some people would suggest that it is lazy to review a band simply by name dropping the band or bands they sound like. But with ‘Evoking The Abomination’ from Brazilian death metal squad Abhorrence, their influence is just so obvious it practically forces you to invoke the name of their fellow country men Krisiun (and the most aggressive tendencies of Morbid Angel who are an obvious influence on Krisiun as well). The drum rhythms and the guitar riffs are eerily similar and if you didn’t know better, you’d think this was a lost Krisiun album. Not that this is a bad thing. This album crushes from beginning to end. Although I think Krisiun have a few stronger songs, I actually prefer ‘Evoking The Abomination’ to any individual Krisiun album I’ve heard. It’s like being adrift in a chaotic sea of death metal, pummeling you with wave after wave of rolling double bass blast beats while the storms of Trey Azagthoth inspired guitar riffs whip around you. Quite fantastic. This is an album that definitely has more than stood the test of time, and would be a great find for any fan of brutal and somewhat chaotically technical death metal.