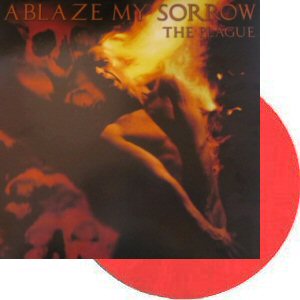 Formed in 1993 by Martin Quist (vocals/guitar), Magnus Carlsson (guitar), Anders Brorsson (bass), and Fredrik Wenzel (drums), Ablaze My Sorrow followed in the footsteps of similar Swedish death metal combos by incorporating lots of melody into their frantic assaults. Replacement drummer Alex Bengtsson arrived shortly after the recording of their first demo, “For Bereavement We Cried,” and second guitarist Roger Johansson was added prior to 1996’s debut album If Emotion Still Burns, so Quist could focus on his vocals. Both of them would exit, however, and new members Fredrik Arnesson (vocals) and Dennie Linden (guitar) performed on 1997’s The Plague. One thing is clear when you listen to this second album and its that it has a nicer (as in not as aggressive) sound, more towards the Gothenburg sound. I know alot of people that think this is shame that the band had something going with the rawness of “If Emotion Still Burns”. However there’s also a lot of fans that see this as were the band found their sound. The production is better, the songs are more focused and the complete album as the perfect balance of speed, brutality and melody. With a track like “Mournful Serenade” the band raised their bar. It has a unbridled energy, fatty mid-paced groove, killer hooks and the awesome power metal scream at the beginning make it an essential song for fans of all metal, not just melodic Swedish death metal. Also included on the disc are some other crushing tracks like “Into the Land of Dreams” and “Plague of Mine.” This disc is redemption in every way for the band. There’s no denying The Plague!