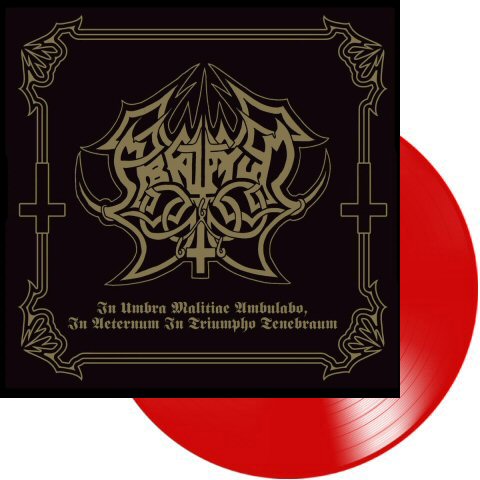 Red vinyl with poster and insert. Limited 100 copies exclusively made for the band

Swedish black metal group Abruptum is predominantly the work of a duo, the ubiquitously named It (screams, violin, drums) and Evil (guitars, sounds, piano), with occasional bit players rounding out the line-up as necessary. Responsible for what is quite simply among the most extreme heavy metal ever attempted, the group’s music has stumped many an experienced metal head with its brutal devotion to sheer noise. Their music has a very improvised feel and it’s not easy to tell whether or not some of the songs are actually ‘songs.’ The band started off in the late 80’s and achieved prominence with the release of ‘Obscuritatem Advoco Amplectere Me’ on the Deathlike Silence label, which was run by Mayhems Euronymous before his untimely death. He said that Abruptums music is the ‘essence of pure black evil’ during an interview conducted by Faust after signing them to his infamous label Deathlike Silence Productions. They are arguably the most twisted, deranged and obscure band to surface from the Scandinavian black metal movement of the early 90’s and remain legendary today for their bizarre form of black noise. ‘In Umbra Malicia Eambulabo In Aeternum In Triumpho Tenebraum’ is a single hour long anthem of utter darkness and terror. If most black metal were comparable to a punch in the face, Abruptum would be like someone creeping up behind you, slowly drilling a hole in your brain and pouring acid in it as it proceeds to vomit blood all over you. The music is painful, slow and disjointed with the only semi consistent part being the drum beat. While they are slowly pounding away on the drums seemingly random guitar sounds, feedback and horror-esque keyboards jump in and out of the music. On occasion down tuned guitars will play along with the drums in a more ‘musical’ sense, which is seemingly the last trace of their earlier demo material that appears on these mid-era albums. comparable in certain respects to extreme doomsters Khanate. As all of this is happening their vocalist, the aptly named IT, wails, moans, cries, grunts and shrieks some of the most tortured, desperate and just plain unsettling sounds I have ever heard come from a human beings throat. He is one of those special vocalists who have a completely inhuman and insane way of using his voice. If someone were to lower a microphone into the bowels of hell and press the record button, I’m sure the result would sound very much like Abruptum. If you are into the more abstract and experimental side of things, I think you will quite enjoy this album.