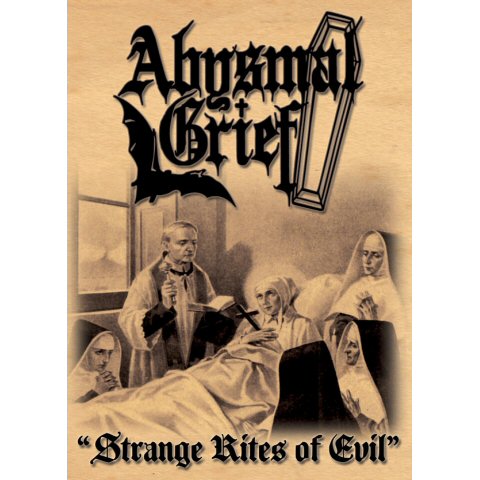 Genoa, and in fact much of Northern Italy, is an area that has a deep, antiquated history linked with barbarism and aggression. In the cities early years it was subject to sacking and rule by the Ostrogoths and Lombards, and it was racked, like much of Europe, by the Black Death in the mid fourteenth century. Although these tragic and dark times are long gone, the barbaric elements of those early days are returning, not in day to day life, but in music; just like any city in any given European country, the eerie sounds and vicious tones of Black, Death and Doom Metal are prevalent within the underground scene. And if the Genoese Metal underground is a tribe, then it’s safe to say that Abysmal Grief is its gnarled warlord chieftain. In the two decades since the bands formation, this ferocious four piece have been producing a very epic, grandiose form of Doom Metal with a lot of great Gothic flourishes, a powerful, heady mix that it’s hard not to appreciate. Their fourth full length record, “Strange Rites Of Evil”, is a surge of heavy, primal music that epitomises this band at their absolute best. The album is an absolute gem, especially if you love Classic Doom in the vein of Candlemass. It has all the hallmarks of a landmark record, from its crushing, dense guitar wizardry to the gloomy atmosphere provided by the keyboards. They blend epic, Gothic elements with much beefier, more intense Death/Doom, and this results in a very eclectic, memorable sound. It’s visceral and brilliant, and I’d urge everyone reading this to sample not only “Strange Rites Of Evil”, but also the entire back catalogue of these Genoese Giants.