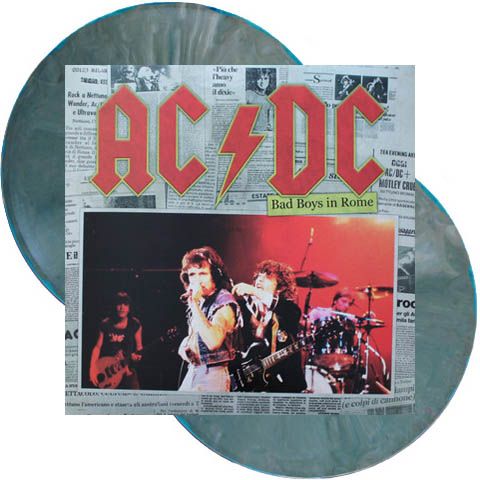 In August of 1983 Ac/dc released Flick Of The Switch, the third to feature new vocalist Brian Johnson. The band played a two month American tour from Oct 11 to Dec 19 then took a six month break before embarking on a short 12 date European tour under the banner of Monsters Of Rock with Motley Crue as supporting act. This album captures the band live at Nettuno Baseball Stadium in Rome on the 5th of September 1984. Whats really special about this show is that it was the first time ever the band played in Italy. After an exciting Motley Crue show the temperature rose even higher when the sound of Angus hit the sky and Ac/dc were on, Guns For Hire off the latest album proved to be a great opener. Fast and furious that leads directly into a blistering Shoot To Thrill. Brian introduces Sin City as a song for Rome otherwise Brian didnt speak much in between the songs. Ready was probably his most used word for the night. Back In Black and Rock N Roll Ain’t Noise Pollution are played and the band can slow things down with and excellent version of The Jack. Flick Of The Switch, the second and last track from the album of the same name has a big groove and a catchy chorus. Again the crowd chants Angus during the intro breaks to Whole Lotta Rosie, classic Ac/dc from start to finish and probably the best example of their boogie sound. honed by years of playing the song nightly it sets the stage for the set finally of Let There Be Rock. Played at almost break neck speed it is 10 minutes of pure unabashed rock n roll. T.N.T. Is a Bon Scott classic Brian makes it his own, I have loved his take on the song since I heard a live B-side. The finale of course is For Those About To Rock, a song that was made for the concert stage it grounds the audience, and listener, to pulp. Let there be rock indeed, simply incredible. Tired and grinning from ear to ear the fans were heading back to the parking lots. This was one of those amazing nights, unbeatable.