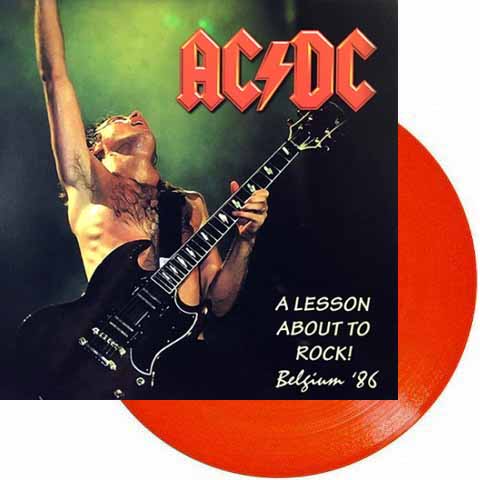 Ac/dc -A Lesson About To Rock lp [red]

In 1985, AC/DC were in a little career trouble. A new breed of rockers were selling millions of albums via mass MTV exposure. Ratt, Motley Crue, Twister Sister and the like were darlings of the channel. Unlike the highly dramatic turmoil and triumphant return surrounding Back In Black, they now faced maybe a more daunting challenge to any veteran rock band – they were teetering on being passe. 1983’s Flick Of The Switch felt a bit old fashioned and the band needed to grab the attention of younger American rockers and the five promo videos they did for Fly – Fly on the Wall, Danger, Sink the Pink, Stand Up, and Shake Your Foundations, all released on a 5 track VHS at the time – did exactly that. Suddenly we got to see the high voltage, stop-your-grinnin’-and-drop-your-linen-charm for ourselves. Sure, the Fly videos were cheeky (what band’s weren’t back then?) but there was an authentic glee about them that came across as you watched. Still Fly On The Wall is seen upon as a big failure, Classic Rock included it in a list of the Worst Albums Ever, Rolling Stone’s original review dismissed it as sexist and incomprehensible and at the time it went to just no.32 in the Billboard album charts – quite a drop from the multi-million selling triumph of Back In Black and US no.1 For Those About To Rock, just four years earlier. But the fact is that Fly On The Wall was the album that helped them grab the youth of America and in turn set up the band’s next three albums for MTV and sales domination. And while the album peaked in the US at #32, slow burn sales from touring and MTV exposure helped it gain platinum status regardless. Not too shabby for “a disaster”. And sure older fans who adores the Bon Scott ear then anything with Brian Johnson is probably a sore spot. Then the production on this album hasnt stand the test of time but this was released in a time where digital production was the new way to go. Sure all Ac/dc fans love the bloozy looseness of the Bon era but for many kids growing up in the 80s then Fly On The Wall and Who Made Who were the albums that managed to caught the interested of the new generation. Tracks such as Fly On The Wall, Shake Your Foundations, Back In Business and Sink The Pink, it’s inherently ass-kicking Ac/dc with that slinky groove-and-grin present throughout. For me, it’s the last of their albums to be a complete collection of quality, well-thought-out songs. On a track-for-track basis, Fly still stacks up against the subsequent albums. Blow Up Your Video was full of pedestrian filler after the singles Heatseeker and That’s The Way I Wanna Rock ‘N’ Roll. Even the commercially huge Razor’s Edge is, in truth, a fairly lean affair beyond the ever awesome Thunderstruck, Money Talks and Are You Ready singles. Ballbreaker and Stiff Upper Lip followed suit. So Fly In The Wall was the album that was released in the midst of that huge rock party that the 80s were and it nicked a whole new generation of rockers, and reignited a stalled career. For that I think this studio album really is one of the most under-rated hard rock albums of its time. So finding new live recordings from this tour always lights a small spark of hope to hear some of these tracks live but unfortunately the band were well aware of the negative press surrounding the albums and only a few tracks from the new album were performed live. The opening show back in September of 1985 featyred Fly On The Wall, Shake Your Foundations, Sink The Pink, First Blood and Playing With Girls but the last two were cut off the set list already for the following night and by the second half of the tour the band were down to just two tracks, the title track and Shake Your Foundations. This album was recorded at the Vorst Nationaal in Brussels, Belgium on the 25th of January 1986 and its not a complete show and unfortunately one of the two tracks from the new album, Shake Your Foundations, is one of the tracks that didnt make onto this recording so what we have is Fly On The Wall, which was the bands opening track at the tour, while the remaining 11 tracks are made up by some of the bands biggest hits.