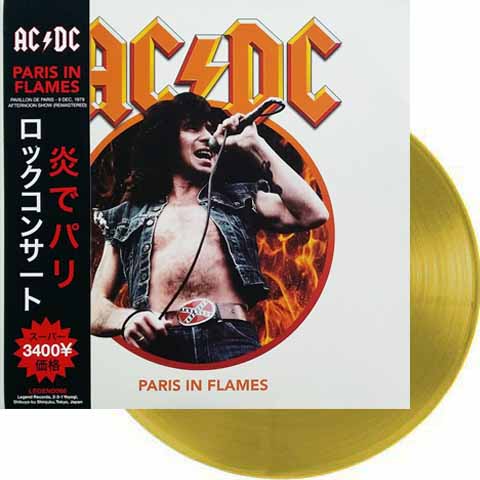 An amazing Ac/dc album on gold vinyl with OBI-strip, printed innersleeve and a replica of the original 20 page European 1979 tour programme. Limited number 50 of 50 copies

In December of 1979, Australian hard rockers Ac/dc were on the verge of worldwide takeover, out on the soon-to-be legendary world tour for their blistering ‘Highway to Hell’ release. The collectively rising stars of Ac/dc and fireball lead singer Bon Scott were captured in the sweat on this album recorded in Paris on the 9th of December 1979. The resulting ‘Paris In Flames’ finds Ac/dc cresting at the peak of their success with Bon Scott. Sadly, only a couple of short months after the singer passed away tragically due to alcohol-related circumstances. The band’s raw power remains as they play classics like “Sin City” and “Rocker.” As a bonus we have a rare interview with Bon Scott that the French TV Studio 3 did with him on the day of the concert