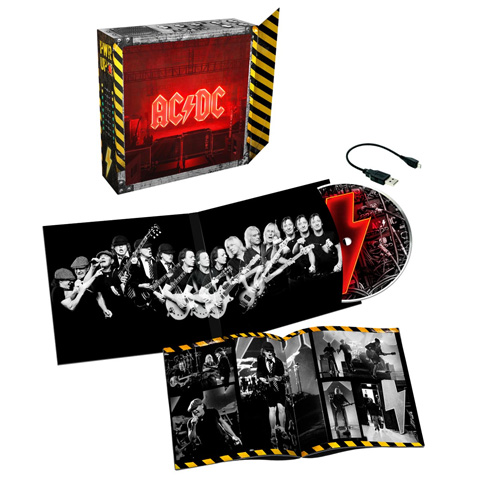 Box with illuminated album cover that comes to life and plays Shot In The Dark through a built in speaker. Box comes with cd, a 20 page booklet, and an USB charge cord.

Power Up is the 17th studio album from Ac/dc. For Power Up the band reunited with producer Brendan O Brien who helmed the double-platinum Black Ice in 2008 and the gold Rock Or Bust in 2014. Charged up for the next decade, Ac/dc cut twelve new tracks for the album, proudly maintaining their signature sound and all of its powerful hallmarks. The line-up of Angus Young [lead guitar], Brian Johnson [lead vocals], Cliff Williams [bass guitar], Phil Rudd [drums], and Stevie Young [rhythm guitar] firing on all cylinders once again.