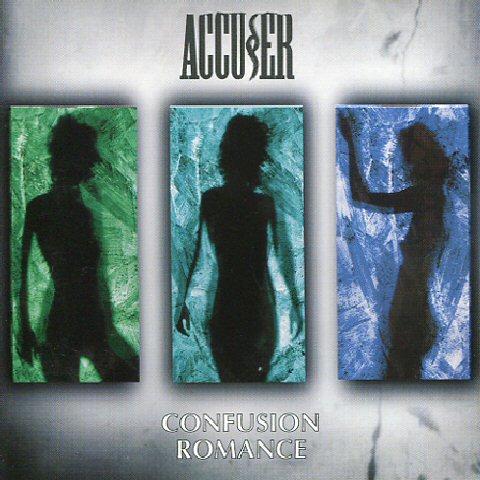 Germany’s Accuser was formed in the town of Kreuztal and followed in the wake of that country’s first wave of successful speed metal bands (Kreator, Destruction, Sodom, etc.). Quickly progressing from the full-out thrash of their early efforts (1987’s The Conviction and 1988’s Experimental Errors) to a more technical style made popular in the Bay Area scene (1989’s Who Dominates Who?, 1991’s Double Talk, and 1992’s Repent), the band proved itself technically gifted. By 1994 the band evolved in sound and took a more modern approach in sound akin to Pantera and Machine Head, and adopted a more rhythmic-based, pseudo-tribal approach reminiscent of Sepultura. This EP was a taster of their new sound and it opens with a cover of Nine Inch Nails’ “Head Like A Hole”. Now, being that this track was a huge success in the early 90s, and many metalheads had become fans of Trent Reznor’s industrial rock legend, it’s not such a surprising choice. Accu§er had already recorded a moderately disposable rendition of Die Krupps’ “Metal Machine Music” on the last album, Repent. However on this Nine Inch Nails cover the band took away the synth line and replaced it with a guitar line. There is another cover on this release, “Drivers Seat”, a cover by English 70s rock act Stiff N Tears. Then we have two original tracks, “Confusion/Romance” and “Cowboy On A String” were we can hear the bands new direction. On “Cowboy On A String” we even have some harsh Biohazard-like barked rap vocals in the verse. Then the EP ends with two live cuts: “Misery” from Reflections, and “Repent” from the album of the same name. Confusion/Romance was an EP meant for the fans as a cute little package with some covers and other nonsense. But in hindsight its only a proof of how many metal bands was trying to find a new style while struggling to survive in the mid 90s.