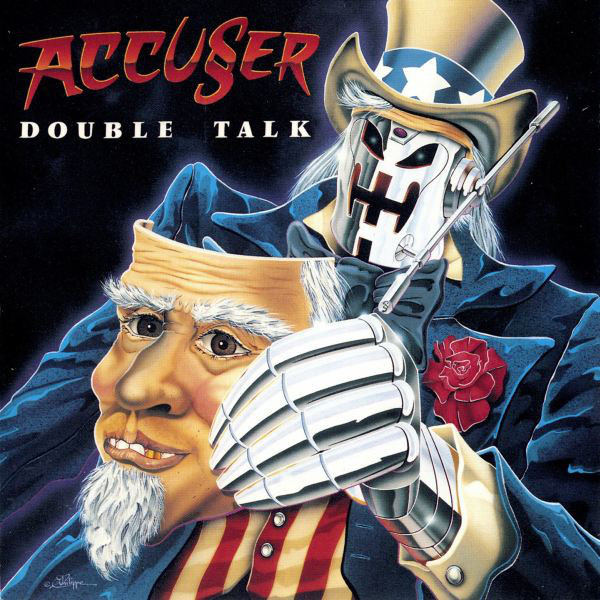 Of course we did not know it at the time of its publication, but “Double Talk” marked the final release of Accuser that stood stylistically in the tradition of their first works. Nonetheless, the change had already begun. The three founding members were still active, but René Schütz was replaced by Milan Peschel. But lo and behold, this guy channelled his juvenile energies in the right way. As far as I can tell, his guitar playing was on an equal footing with that of his experienced colleague Frank Thoms. Furthermore, the album was kicked off by a short and compact thrasher. The title track, driven by razor-sharp riffs, convinced with its dynamic approach and the cynical lyrics. It marked an explosive start and appeared as an alternative concept to the overlong tunes of “Who Dominates Who?”. But this was a fallacy. Already with the second tune, Accuser fell back into old patterns. Frankly speaking, the guys offered more of the same, for better or for worse. Very disciplined and very Teutonic, they once again provided carefully constructed songs. With the negligible exception of a miniature instrumental, each and every piece pushed the five minute-mark. The tracks were full of more or less interesting ideas and thrashing riffs, but this was a bit too much of a good thing. The wish to score with complex tunes did not really match with the songwriting abilities of the band. It could not be ignored that the pieces were too complicated and lacking of a central theme. Inappropriate parts like, for example, a short funky intermezzo were not helpful. Summing up, “Double Talk” presented sharp and effective riffs as well as meandering guitar lines that lacked of coherence. The clean production did not suffer from sterility while offering a good balance between the instrumental section and the angry vocals. In technical terms, there was nothing to complain so that I am speaking of a solid thrash metal effort. But if you do not have much time, just enjoy the title track.