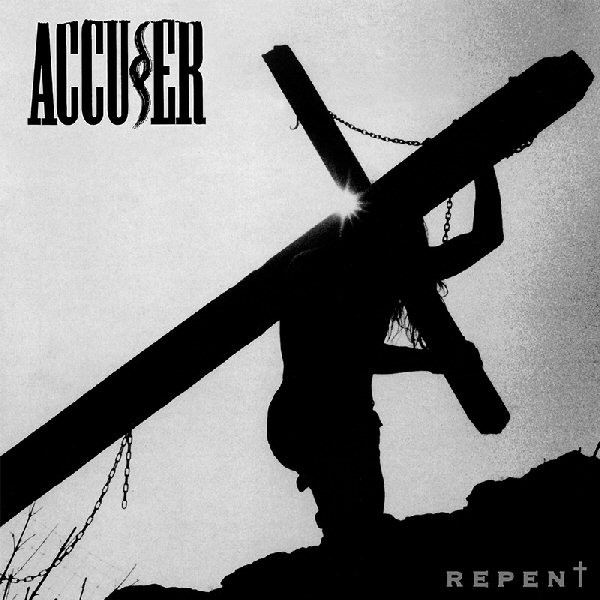 After “Double Talk” Accusers singer/bassist Eberhard Weyel left the band, and their guitarist Frank Thoms took over on vocals and Milan Peschel became their new bass player. And with “Repent” Accuser came up with a good thrash metal album. Some useless info: after this album they started to add groove metal to their music. Music on “Repent” is quite technical, but this never becomes overly technical so there is still some simple hooks, and they have put more thought on songwriting than in trying to be as technical as possible. Music style on this albums is a little bit similar to “Arise” era Sepultura, but this is far away from being a clone, and “Repent” is maybe a little bit more technical. Frank Thoms vocals are quite good. And his vocals are one of the biggest things that remind me of Sepultura, as his voice is a little bit similar to Max Cavalera’s voice. Guitar work of Frank Thoms and Rene Schutz is one of the best things on this album, there is a good amount of good riffs and there is few great solos. Drummer Volker Borchert and bassist Milan Peschel both does a good job but nothing amazing. Accusers lyrics still did no lack of cynicism. Lines like “We can save your soul from hell / But only if you´re heterosexual” excoriated the Christian ideology with a pointed pen. But in musical terms, Accuser was no longer the same. The guys did not any longer look out for any form of technical ecstasy. At the centre of attention were the songs themselves. The band had discovered the power of the traditional verse-chorus-verse scheme and the band was able to implement this pattern successfully. The songs did not lack of power and aggressiveness. Highlights like the title track or “Get Saved” cleared my confused mind in a stormy manner. These tunes sustainably embodied the new belligerence of Accuser. But even if the band chose a more viscous approach, the solid riffing guaranteed an enjoyable listening experience. Just lend an ear to the dragging “The Drones” in order to check my statement. In alignment with the new musical vehemence, the production put the emphasis on density and robustness. The more or less clean sound of the former publications did not show up again. Accuser were working on a new image while appearing less subtle and more antisocial. The uncompromising mix was suitable in order to support this effort. It was difficult to say whether the exhibited attitude was credible or not. We may not forget that the group did not originate from a socially disadvantaged area, but from the more or less tranquil Siegen, a medium-sized city in a rural region of Germany. But I guess this question can be neglected, because there was no doubt that the band did not lack of euphoria and combativeness. Like a new born child (a very angry new born child), the band wanted to conquer the world as soon as possible. They over-reached a little bit, but the powerful tunes of “Repent” shaped a remarkable album.