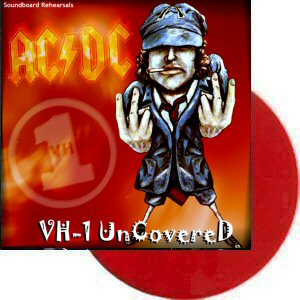 In the beginning of July of 1996 Ac/dc played two nights at the Palau San Jordi in Barcelona, Spain during their Ballbreaker European tour. The day after the second show the band took the plane and flew to London for a single day. They were asked by the British commercial television channel VH-1 to record some songs live in the studio for a special TV broadcast. For the occasion the band listened to old material they hadn’t played for a very long time. As Brian had never sung some of the songs originally recorded with Bon Scott, he had to read the lyrics while he was singing. But they also recorded other songs during the breaks just for fun. In total 14 songs were recorded during the session. In addition to the songs played on stage during the Ballbreaker tour, the band recorded two songs they hadn’t played since 1978, namely ‘Riff Raff’ and ‘Gone Shootin’, a song they never played on stage neither with Bon Scott nor with Brian Johnson, ‘Go Down’, and two cover songs, namely ‘Mary Superstitious’ from Stevie Wonder and ‘I Feel Good’ from James Brown. These 14-songs were recorded at the VH-1 studios in London on the 5th of July in 1996. This limited album features rehearsals for that recording. After the rehearsal and the recording at VH-1 Studios, Ac/dc flew back to Portugal in order to perform in Lisbon on July 6. The recording on this album is very interesting as the band are in excellent shape and play phenomenally well. The entire band is tight and Brian’s vocals are top notch. The audio quality is excellent. Riff Raff hits you like a ton of bricks. To hear Go Down live for the first time is of course a great treat. Great stuff. Overall lots of surprises and great to have this material on vinyl