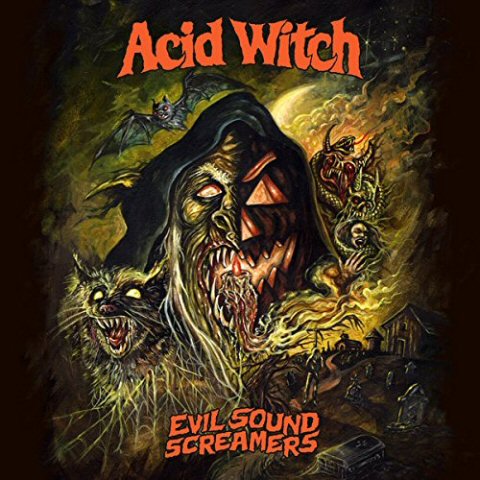 Stoner/Doom Metal kings, Acid Witch clearly love Halloween. In fact, the band loves the holiday so much, they’ve devoted another whole album to it. Scare Tape features a sound bite from an old, narrated PSA for Halloween safety. The sound bite then takes a weird turn with the narrator introducing a little girl about to carve a pumpkin. The narrator disturbingly asks, “Can you imagine how that knife could slip?” No, I really didn’t want to. The question is repeated and slowed and sped up. Other safety tips are featured like, “Don’t cut across empty lots”, “Don’t leave candles burning in pumpkins for long periods of time”, and of course, be careful of those ubiquitous razor blades in apples, or houses giving out straight-up acid tabs with your candy. Too late! Someone must’ve slipped you something, because “Mr. Beistle” sounds like a song number from ‘The Nightmare Before Christmas’ that was rejected for being too creepy. It’s a nauseous fever dream of a number that features that all-important fuzzy bass and slow-plodding drums Stoner is famous for. After a search of the name that inspired the song, I discovered that the real Mr. Beistle used to have a stationary company in the 1900s that specialized in cute, kitchy Halloween designs of pretty witches, happy pumpkins, and funny, dancing black cats, and skeletons that are still available to this day on their website. A much less terrifying origin story, for sure. Speaking of which, “Nain Rouge” (French for ‘Red Dwarf’) is a nod to the band’s home town of Detroit Michigan, and its urban legend of a devilish imp creature that roams the city. The main attraction has to be “Mutilation Mansion” with its creepy, demon vocals growling along with the chorus of the damned, singing of your fate as you tread through a haunted death trap. Evil Sound Screamers’ vocal style is a lot less throaty than previous albums, and the tempo is cranked down just a hair. Besides that, the rest of the album is virtually unchanged from the rest of their discography. It’s hard to improve on Doom, and why would anyone want to? Halloween may be long over, but in Acid Witchs book, it’s only getting started!