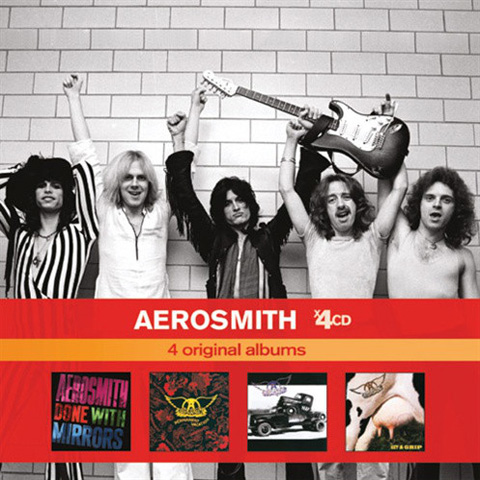 Clam shell box featuring 4 Aerosmith albums in cardboard sleeves. The four albums are: Done With Mirrors, Permanent Vacation, Pump and Get A Grip.

Done With Mirrors 1985
Joe Perry returned to the band in 1985, and Aerosmith turned out their finest record since Rocks. Unlike the records that preceded it, Done With Mirrors is powered by the same smart-assed lyrics and filthy guitars that formed the core of Aerosmith’s best songs. It didn’t receive the commercial or critical attention but it marked the beginning of their remarkable comeback.

Permanent Vacation 1987
The much-ballyhooed reunion of the original Aerosmith lineup had pretty much fallen flat on its face after 1985’s hit-and-miss Done With Mirrors. Realizing that the band simply couldn’t do it alone, A&R guru John Kalodner capitalized on the runaway success of Run-D.M.C.’s cover of “Walk This Way” and decided to draft in the day’s top hired hands, including knob-twiddler extraordinaire Bruce Fairbairn and career-revitalizing song doctors Desmond Child and Jim Vallance. Together, they would help craft Permanent Vacation, the album which would reinvent Aerosmith as ’80s and ’90s superstars. Yet, despite the mostly stellar songwriting, which makes it a strong effort overall, some of the album’s nooks and crannies haven’t aged all that well because of Fairbairn’s overwrought production, featuring an exaggerated sleekness typical of most mid-’80s pop-metal albums. Furthermore, Desmond Child’s pedantic writing often compromises the timeliness of even the best material. On the other hand, pre-fab radio gems like Rag Doll and Dude (Looks Like a Lady) remain largely unassailable from a delivering the goods perspective. But remember kids, this is Aerosmith, so that can only mean one thing: a guaranteed number of incredible tracks for any time and place. These include the excellent hobo-harmonica fable of Hangman Jury, the Caribbean title track and the cover of the Beatles I’m Down. Finally, the crowd-pleasing schmaltz of Angel showcases the band at the peak of its power ballad cheese. A valiant effort, this album proved to be the crucial catalyst in reintroducing Aerosmith to the masses, but if you’re looking for an even better example of the band’s renewed strength, check out Pump first.

Pump 1989
Where Permanent Vacation seemed a little overwhelmed by its pop concessions, Pump revels in them without ever losing sight of Aerosmith’s dirty hard rock core. Which doesn’t mean the record is a sellout — “What It Takes” has more emotion and grit than any of their other power ballads; “Janie’s Got a Gun” tackles more complex territory than most previous songs; and “The Other Side” and “Love in an Elevator” rock relentlessly, no matter how many horns and synths fight with the guitars. Such ambition and successful musical eclecticism make Pump rank with Rocks and Toys in the Attic.

Get A Grip 1993
1993’s “Get a Grip” was a balanced and well executed album that was kind of the end of what I call their “second era” (1985-1993). Their raw, powerful playing stays intact but the pop side of things get’s adjusted a bit to give us some fresh, commercial, video, and radio friendly tracks. Their ability to slowly change some of the sound, and to evolve, without tarnishing thier image as old school rockers from the 70’s, is really quite amazing. The album has more than the normal track listing we are used to from them, and instead of featuring 14 “rockers and ballads” more or less gives us fun rock tunes, some serious, deep melodic treasures, as well as of course, a fun/funny track or even just lyric here and there. “Eat the Rich” “Get a Grip” and “Fever” embrace the youth of today with the signature fast rolling guitars and beats from frontman Steven Tyler and guitarist Joe Perry. “Living on the Edge” “Crying” and “Amazing” are not pluged into any specific category, but each song, though not as in depth as thier 70’s hits of the same ballast, still are strong in songwriting and cohesive in melody. With “Get a Grip”, Aerosmith made sure to leave their stamp on the 90’s much the same way they did on the 70’s and 80’s…with great rock and roll songs that a fan may never tire of listening to.