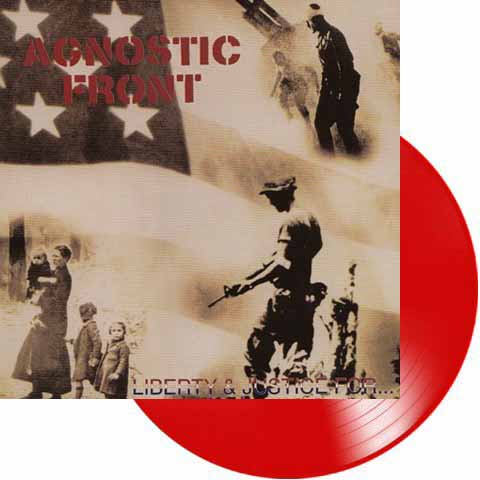 After the controversy which followed their open embrace of speed metal on 1986’s crossover classic Cause for Alarm, Agnostic Front took a step back into more familiar hardcore territory with the following year’s Liberty And Justice For…. Gone were the double-kick drums which had offended many of the band’s loyal fan contingent, but the razor-sharp riffing of guitarist Vinnie Stigma remained defiantly intact and proved that, while this album might have been a compromise of sorts, it was certainly no surrender. For his part, tattooed hardcore messiah (and singer) Roger Miret uses his ever-incendiary, take-no-prisoners lyrics to instantly reaffirm Agnostic Front’s righteous commitment to social and political commentary (outright rage is more like it, actually) and reinstate their street-savvy hardcore ethos for all to see. Kicking off with the album’s severely ironic title track (introduced by kids reciting the pledge of allegiance), the band piledrives through a storming set of instant classics, including “Anthem,” “Hypocrisy,” “Censored,” and the exceptional career highlight “Crucified.” Sadly, Liberty & Justice For… would prove to be Agnostic Front’s last undisputed hardcore masterwork, as Miret’s subsequent incarceration would completely derail the band’s future plans.