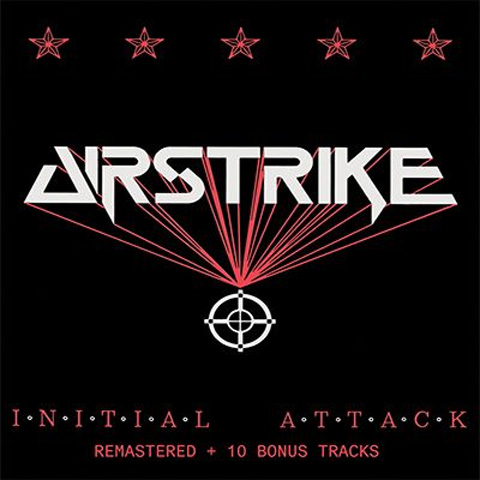 It was 1985. Frontman/rhythm guitar player Gregg Lee and drummer John (Jet) Matthews had recently split from the popular cover band Justin Morgan that Lee had started in his parents basement his senior year in high school. Dissatisfied with touring the Midwest on the cover circuit, the two joined forces and began drawing up plans for the Initial Attack of the band Airstrike. Having left Justin Morgan two years prior to Matthews, Lee had been writing songs on his Fostex 4-track cassette recorder and presented the idea. The two searched for an axe-man and a bass player while writing and recording new demos and mixing the old Fostex recorded material. With Andy (Lucky Strike) Melendez, who had recently worked with Tommy Shaw (Styx) in an area project called Mainstreet was offered the roll of bass guitar and 18 year-old guitar player Kurt (Krome) Griffey from Red Oak, joined and together they began an intense rehearsal to record what is now the highly sought-after album Initial Attack. The band released only 100 vinyl copies and 300 cassette tapes in 1986, and toured for 2.5 years. During that time a few other musicians were added to the mix in various positions. Michael Babb filled keyboard parts, Ronnie Moore covered guitar and vocals, and Christian Scalaro beat the drums for the last year. The demise of the band took place in Cincinnati, Ohio when Lee was involved in a car accident that put things on hold for 9 months. During that time, Nick St Nicholas (Steppenwolf) asked Lee to front his project called The Wolf, which Lee turned down due to his injuries. St. Nick then hired the other Airstrike players and the rest is history. Gregg Lee went on to co-create Cowboy X and later the Top 100 and Grammy-considered, Paisty Jenny.