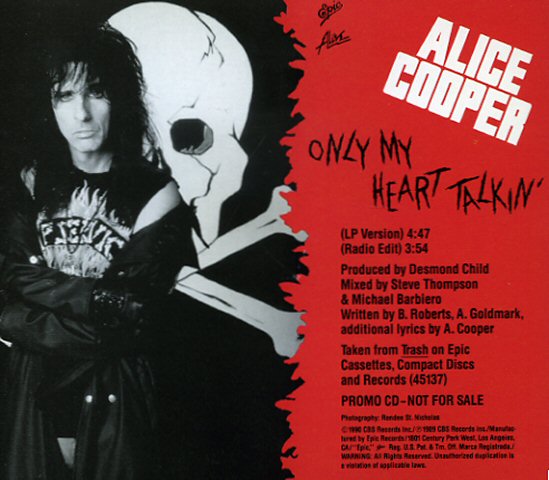 PROMOTIONAL ONLY means issued by record company in very limited quantity and sent to select industry professionals ONLY for promotional consideration/airplay. Never for sale and highly collectable releases

Alice Cooper hadn’t had a hugely successful album in over a decade when, in 1989, he teamed up with Bon Jovi producer Desmond Child for Trash a highly slick and commercial yet edgy pop-metal effort that temporarily restored him to the charts in a big way. Only My Heart Talkin was the fourth and last single to be released from the album. The song only got to #89 on the US charts, but the song had bigger success in Australia, achieving #47 at its peak, though it was the least successful single from the album (the other three singles were Poison, House of Fire and Bed of Nails). This song was written by Alice Cooper, Bruce Roberts and Andy Goldmark. It features Steven Tyler from Aerosmith on guest vocals. This US promo comes with back cover insert and features also a Radio edit version of the track