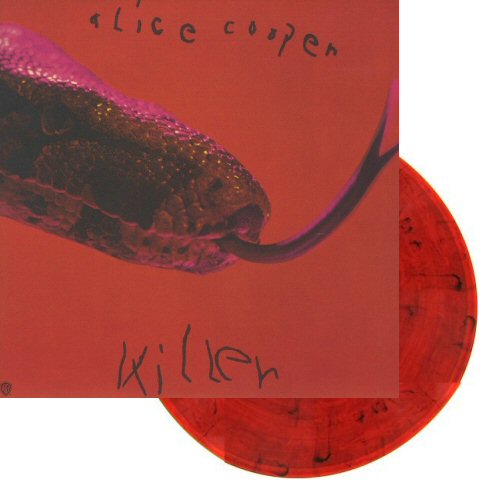 American 2018 re-issue on red and black vinyl with a detachable 1972 calendar.

Alice Cooper wasted little time following up the breakthrough success of Love It to Death with another album released the same year, Killer. Again, producer Bob Ezrin was on board and helps the group solidify their heavy rock (yet wide-ranging) style even further. The band’s stage show dealt with the macabre, and such disturbing tracks as ‘Dead Babies’ and the title track fit in perfectly. Other songs were even more exceptional, such as the perennial barnstorming concert standard ‘Under My Wheels’, the melodic yet gritty ‘Be My Lover’, and the tribute to their fallen friend Jim Morrison, ‘Desperado’. The long and winding ‘Halo of Flies’ correctly hinted that the band would be tackling more complex song structures on future albums, while ‘You Drive Me Nervous’ and ‘Yeah, Yeah, Yeah’ showed that Alice Cooper hadn’t completely abandoned their early garage rock direction. With Killer, they became one of the world’s top rock bands and concert attractions; it rewarded them as being among the most notorious and misunderstood entertainers, thoroughly despised by grownups.