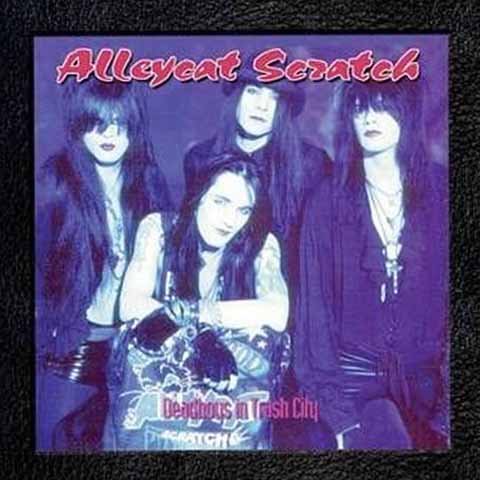 Alleycat Scratch was an American Glam metal band formed in San Francisco in the year of 1988. They fell somewhere in between Motley Crue and Swingin Thing when they lived out their dreams on the infamous Sunset Strip. However, they also fell through the cracks – going unnoticed except for the handful of collectors that purchase their independent debut on net auctions for outrageous sums. The reason the band never gained popularity or commercial success has a lot to do with the grunge movement of the 1990s. Their music has been considered highly underrated and you may wonder what sets Alleycat Scratch apart from thousands of other poofed-upped puffballs of the hair metal craze, well I’ll tell you – riffs. Like a magician pulling a rabbit from his hat, Alleycat Scratch seems to be able to grab memorable riffs from out of thin air. Plus the band is able to mix the bubblegum of Poison with the sleazier side of early Motley Crue and at times seem to tread similar water as the underrated Cats In Boots. Songs like “Stilletto Strut”, “Take A Bite (Outta Me)”, “Cat Got Your Tongue” and “Love Sick Junkie” are so damn catchy that this disc spins around my player quite often. Even the ballad “Roses On My Grave” is tolerable and “Sexual Addiction gives Winger’s “Seventeen” a run for its money. They don’t make music like this anymore, and that’s a shame. This debut album, Deadboys in Trash City has been considered some of the best Sleaze rock of the period, although it never gained commercial success. Alleycat Scratch shows that even the lesser known hair bands had more to offer then a flashy image. Deadboys In Trash City is a great album, a hell of a lot of fun and should bring back lots of memories for Sunset Strip aficionados. They disbanded in 1994.