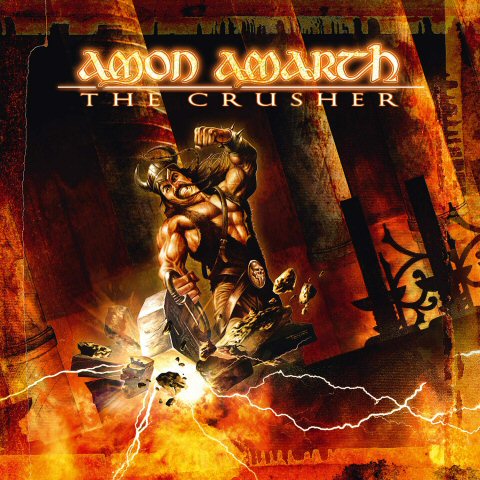 After nearly a decade of recording and a few lineup overhauls, each contributor to Amon Amarth’s previous effort, Avenger, stuck around for The Crusher. Original members Johan Hegg (vocals) and Olavi Mikkonen (guitars) are again joined by Fredrik Andersson on drums, Johan Söderberg on guitar, and bassist Ted Lundström. There is nothing new on this outing to surprise fans of this band’s familiar Scandinavian death metal. The riffing from guitar and drums is workmanlike, and Hegg’s vocal rants carry all the requisite ferocity. During slower, more musically focused numbers like “As Long as the Raven Flies” and the opener, “Bastards of a Lying Breed,” certain attributes of ’80s thrash and song-driven metal create spaces that enhance the rest of this album’s dense material. The Crusher blends seamlessly with the rest of Amon Amarth’s Metal Blade catalog. There isn’t a standout among these recordings, as their textural differences are negligible. Listeners who enjoy this kind of metal should certainly check out Amon Amarth, and The Crusher would be a good place to start.

Track listing:
1. Bastards Of A Lying Breed
2. Masters Of War
3. The Sound Of Eight Hooves
4. Risen From The Sea 2000
5. As Long As The Raven Flies
6. A Fury Divine
7. Annihilation Of Hammerfest
8. The Fall Through Ginnungagap
9. Releasing Surtur’s Fire
10. Eyes Of Horror