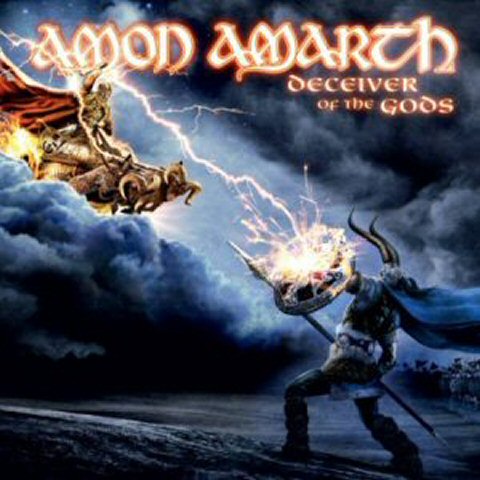 What begins with scorching, melodic twin leads, a mead-induced flurry of double-kick drumming, and the meatiest, most malevolent vocals this side of Valhalla? If you answered “The ninth studio outing from Swedish melodic death metal legends Amon Amarth” then you are correct and can drink from the chalice. Bolder and more bottom heavy than 2011’s Surtur Rising, Deceiver of the Gods retains the band’s penchant for crafting unyielding blasts of Viking brutality, but tempers each beating with the kind of melodic artistry that can only stem from 15 years spent in the trenches. Those artful melodies imbue much of the album with a toasty patina of NWOBH and power metal, especially on standout cuts like “Father of the Wolf,” “Under Siege,” the aforementioned opening title cut, and the epic closer “Warriors of the North,” all of which sound like deadlier Norse spins on the better cuts from Iron Maiden’s Seventh Son of a Seventh Son. It’s not all just Manowar sans clean vocals though, as evidenced by the absolutely pulverizing “Blood Eagle” and the propulsive Priest-meets-Venom gallop of “Coming of the Tide,” two tracks that announce (with great authority) that Amon Amarth have lost none of the cunning or vivacity that made them such a dominant force in the early days of the new millennium. If anything, Deceiver of the Gods suggests that Amon Amarth may just now be hitting their stride, as it’s an undeniably well-honed set, yet the band manage to flex their muscles well outside of the Draconian stylistic confines of the genre by remaining, like a true Viking horde, prickly, primal, and unstable.