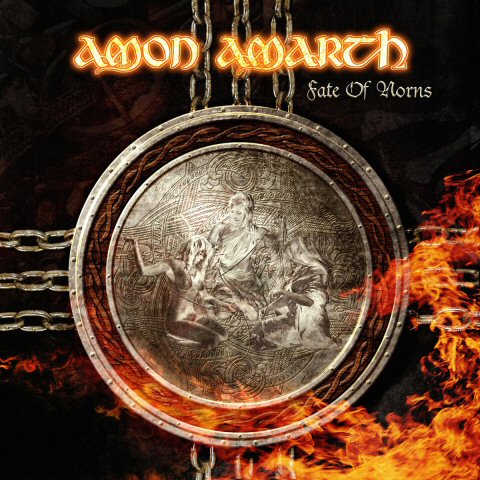 Amon Amarth’s fifth full-length isn’t so different than its 2002 predecessor, The Crusher. Musically, Fate of Norns is Spartan death metal built on epic, anthemic melodies, a perfect example of the Iron Maiden/death metal fusion tagged the “New Wave of Swedish Heavy Metal.” And lyrically it’s still full of Viking imagery, as songs like “Valkyries Ride” and “The Pursuit of Vikings” attest. It’s the same theme that these guys have been hammering at since their 1996 debut mini-album, Sorrow Throughout the Nine Worlds. It’s also a theme that literally hundreds of other Scandinavian bands have hammered at too, most of them leaving it a hackneyed corpse ready for the pyre. Which is where Amon Amarth have set themselves apart. These aren’t just songs written about Vikings, they are written by Vikings. They’re ready for death in “Arson” where one of five left to burn survives and comes back for revenge in that tracks’ sequel, “Once Sealed in Blood.” Blood lust themes aren’t unusual, but Amon Amarth tackle them with a depth often lacking from their contemporaries. Which brings up the most intriguing track, “Fate of Norns”: “No man should have to bury his child/Yet this has been my share/The tears I shed run bitter and wild/It’s a heavy burden to bear.” A knotty subject for a band and a style more given to crushing skulls than tears, but that kind of depth is what Amon Amarth have brought to Fate of Norns and what makes it stand out in a sea of barbarian pretenders.

Track listing:
1. An Ancient Sign Of Coming Storm
2. Where Death Seems To Dwell
3. The Fate Of Norns
4. Pursuit Of Vikings
5. The Valkyries Ride
6. Beheading Of A King
7. Arson
8. Once Sealed In Blood