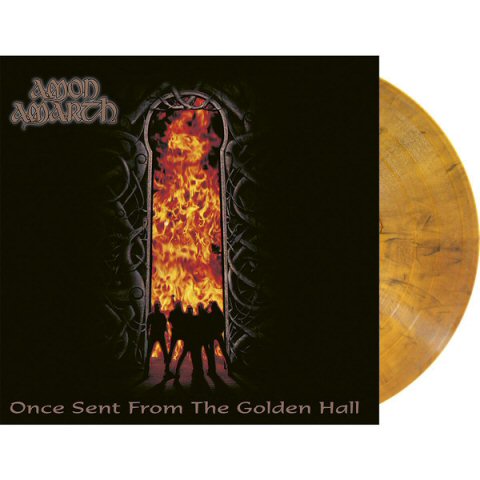 Amon Amarth -Once Sent From The Golden Hall lp [orange/black]

Deeply rooted in death metal with firm beliefs in Viking mythology, Amon Amarth formed in 1992 in Tumba, Sweden, a southern suburb of Stockholm. They began writing material with lots of melodies, harmonies and lyrics about Vikings and the northern gods. In summer 1993 they entered Lagret Studio to record the never released demo ‘Thor Arise’. The band continued to rehearse and writing stronger material and again entered the studio. The result was the second demo ‘The Arrival Of The Fimbul Winter’. This time the band was much more satisfied with the sound and songs and launched it to an unsuspecting underground. The response was overwhelming, quickly selling out of the first pressing and secured them a one off deal with Singapore’s Pulverised Records. This time they decided to use Abyss Studio, owned by Peter Tagtgren of Hypocrisy, and during five days in November 1995 the MCD ‘Sorrow Throughout The Nine Worlds’ was recorded. The five track recording contained three new songs plus two re-recorded tracks from the band’s second demo. The MCD was released in April 1996 and continued the band’s build to world dominance. June 1996 saw the exiting of drummer Nico who was quickly replaced with Martin Lopez. During this time labels began to show interest and after much consideration the band chose to sign with Metal Blade. In March 1997 Amon Amarth entered again Abyss Studios to record their Metal Blade debut ‘Once Sent From The Golden Hall’ with Peter Tagtgren. The result proved that they were destined to become force of fury in the Swedish Death Metal scene and beyond

Track listing:
1. Ride For Vengeance
2. The Dragon’s Flight Across The Waves
3. Without Fear
4. Victorious March
5. Friends Of The Suncross
6. Abandoned
7. Amon Amarth
8. Once Sent From The Golden Hall