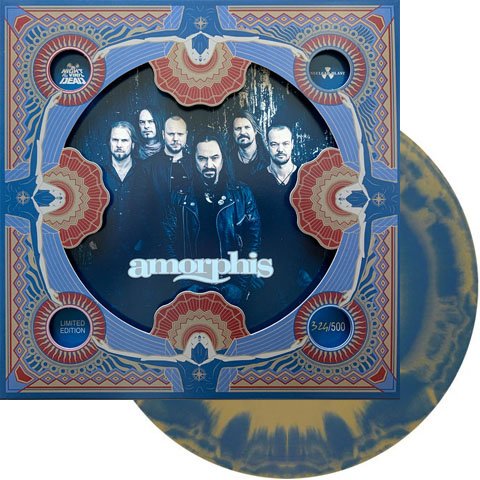 Amorphis -An Evening With Friends At Huvila lp [blue/gold]

Amorphis has been pretty much dominating the Finnish live music scene this particular summer. As August of 2016 drew to a close, Helsinki celebrated the annual multi-arts festival, Helsingin Juhlaviikot (Helsinki Party-Weeks), and on the 27th of August, Amorphis took over the Huvila-teltta stage to perform a special one hour show opening with Enigma, a good mood-setter. The biggest shocker of the night was already the second song, the title-track off Far From The Sun (2003), which was played for the first time in over 10 years. I never would’ve expected Amorphis to pull anything from that album out of the vault, given how unhappy the band members are with it. While Far From The Sun is easily the lowest point in Amorphis otherwise solid discography, the title-track certainly gained new life with this performance. The acoustic set continued with Silent Waters, which I didn’t recognize at first due to the more guitar-driven arrangement, and ended with My Kantele, which culminated in a great jouhikko [traditional Finnish bowed lyre] solo by Pekko Käppi. These acoustic arrangements with extra instruments were so well done that it would’ve been pleasure to hear more of them. Tomi Joutsen also admitted he doesn’t feel completely at home while performing unplugged, because it makes him feel naked. While saxophonist/flutist Sakari Kukko left the stage and Tomi Koivusaari and Esa Holopainen switched to electric guitars, Niclas Etelävuori played a heavily effected bass intro, which led to Silver Bride. After that, Kukko came back and it was time for a double punch when Sampo and Alone were performed. This was a magical moment, because I hadn’t heard either song live in a while, and both were extended with instrumental bits that allowed Käppi and particularly Kukko to shine. The Wanderer was up next, and while it’s not a bad song, it felt like an underwhelming pick after the streak of greatness that had preceded it, especially because it was performed without any guests. Joutsen even mistakenly introduced it as the first single off the latest album, though he admitted he wasn’t totally sure, blaming years of headbanging for destroying his brain cells. However, the set was wrapped up perfectly when Anneke van Giersbergen was introduced to a rapturous applause, joining Joutsen for a gorgeous duet on Her Alone. Their voices melded well together and I wish the band would’ve played one more songs with her.