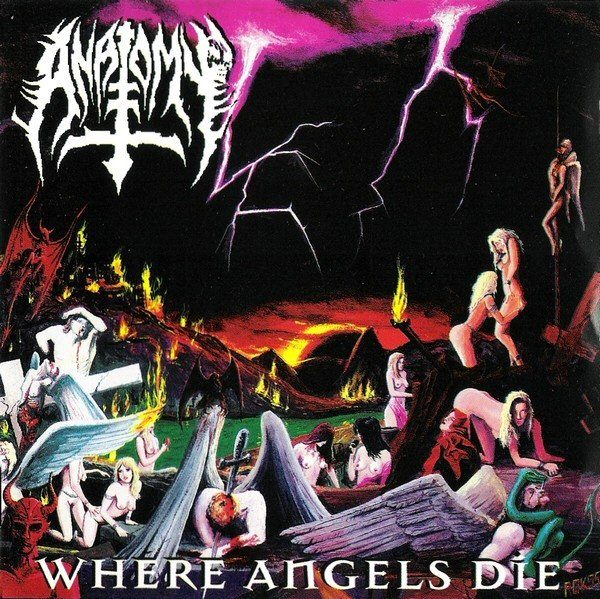 This is the debut album of the unaclaimed but legendary Australian black metal band, Anatomy. Anatomy features members from classic Australian acts like Hobbs Angel of Death, Gospel of the Horns, Vomitor, and Bestial Warlust. Anatomy stand alongside Nazxul and Abyssic Hate as leaders of Australian black metal, and as with these two bands, one could be mistaken for assuming that Anatomy hails from the frostbitten fjords of Norway or Finland, as this is some very grim and dark black metal. I always wonder why black metal listeners outside of Australia ignore this band, as their style is certainly not generic or typical. They dont play ultra-fast tremolo-picked, blast-beat laden, 1349 other bands sound like us black metal. Most of this album is played at a slow and doomy tempo with a bleak and fuzzy guitar sound that inspires feelings of sheer hopelessness. The drummer shows that he can play blast-beats during the faster bits, and he shows creativity in his fills. The keyboards act as a subtle backbone for the guitars at certain climactic stages of songs, giving them a mystic aura without sounding too fruity. They are poignant yet unobtrusive, like the wind. The production is clear, without losing the earthy and raw sound craved by black metal listeners. The vocals are a black metal rasp, but at the low end of the scale. On occasions the vocalist uses a death metal influenced growl, but in general I am reminded of the Impaled Nazarene vocalist: slightly punk influenced, with the tendency to slur words into each other. However, the vocal performance on this album is more polished than the aforementioned, with well executed and powerful screams that punctuate the riffs, and have variation in tone and pitch. The vocals blend well into the mix, as they should. Aside from containing the above important ingredients for the sub-genre, this album presents the listener with something often viewed as a bonus: guitar solos. These are certainly not overdone, and tend to come in during the slower, brooding passages, but they are fast and they shred. The placement of these solos is such that they seem to rise up from the pits of hell. There are also some well hidden slow solos. The songs all take the listener on a dark journey, progressing naturally with seamless tempo and riff changes. The band members have clearly spent a lot of time listening to Burzum. The long song lengths are necessary for the story to be told, and only conclude once the destination has been reached. The songs maintain coherence, as there tends to be a common theme or riff, which is revisited and built upon. Considering that this is a debut album, the band shows plenty of maturity in the composition of songs and transitions between them. The riffs arent catchy enough to remain in the listeners head for any extended period, nor would they be considered classic, but the darkness of the music does have a lasting impact. The music is delivered in a unique style that stands out, particularly when compared to so many of the darkclones that have emerged from the underground. Dont dismiss this band! This album is recommended for fans of original black metal.

Track listing:
1. Last Pleasures For Those Of The Apocalypse Of Hate
2. Under The Wings
3. Armagedoom
4. Forbidden Realms
5. The Call Of Doom
6. Where Angels Die
7. The Frozen Darkness