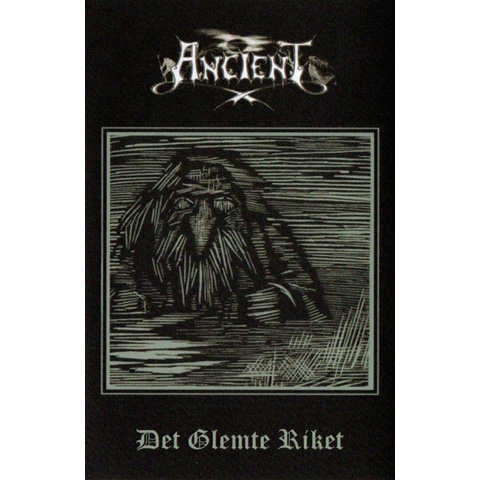 Ancient is a Norwegian black metal formed in 1992 and at the beginning they had a raw black metal sound, similar to Darkthrone’s works, then they moved towards a more Nordic/atmospheric black metal sound, akin to Emperor and then they added gothic-style instruments such as violins, female vocals, and synthesizers to their music. ‘Det Glemte Riket’ was their debut release after their first demo. On this single the band was all about pure Norweigan black metal, and guess what? They delivered. Ancient started along the tail-end of the second wave of black metal which rose to infamy in their home country and kicked-off the equally as good, yet less violent third wave of black metal. At the time black metal had not became so gay in the fact that it needed to obsess with vampires or anything like that, but was still taking what was the golden-era of black metal and progressing with it. The recordings of ‘Det glemte riket’ and ‘Huldradans’ on this 7” EP are actually the same than the ones on ‘Svartalvheim’, with the only exception being that the sound here is mixed even a bit rawer than on the album. The difference is not that important though, it’s nearly the same. ‘Det glemte riket’ and ‘Huldradans’ are among the best tracks on ‘Svartalvheim’, it’s all there, melancholic acoustic guitars, chilly riffs, haunting melodies, fast, raging parts and a phenomenal guitar solo in ‘Huldradans’. The guitar sound is extremely raw, the deep Black Metal rasps are some of the grimmest ever and the simple but effective drumming fits the music perfectly. But most important is the mystical atmosphere that these tracks are evoking, it’s unique. Listen to this by a camp-fire in a forest at night and you will not only hear it, but also feel it. This is an excellent cult EP of the genre. Black metal purist should own it.