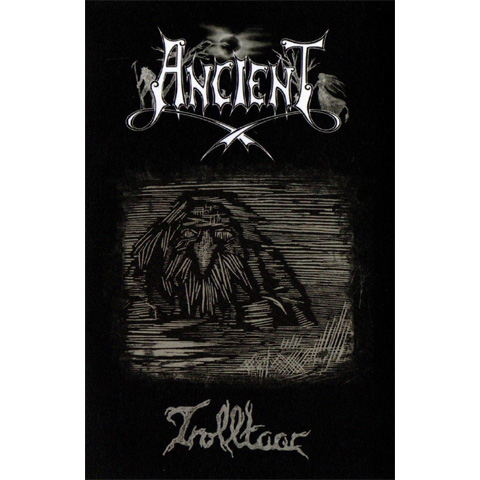 Trolltaar (a Trolls tear) was the last good offering of this band before they went downhill. The sound on Trolltaar is rather thin, the guitars sound somewhat distant (except for the solos), the drums are buried in the background, and so are the vocals (at least the grim ones); the only instrument that sounds clear all the time is oddly enough the bass, but in some strange way this sound fits the music well and adds to the atmosphere. Ancient are not trying to be aggressive or dark here, but they rather go for an emotive, nostalgic atmosphere, although Trolltaar and Nattens skjonnhet are partly at a pretty fast pace. Both these songs peak in a guitar solo each that are to be counted among the best ever recorded in Black Metal, they perfectly embody the rough beauty of the region Ancient originally come from, namely Vestlandet (the western part of Norway). Again, all of the riffs are excellent and have somewhat of a melancholic feel to them, and the subtle use of keyboards enhanced the majestic mood of the music. Eerily howling winds has already been recorded for Svartalvheim, this recording here differs in sound both from the other tracks on this album and the version on their debut-album. It actually sounds more like a rehearsal recording. Personally, I prefer the Svartalvheim-version though, because the vocals sound weak on this version here. Fjellets hemmelighet is sort of an outro, consisting only of keyboards, fragile, lamenting female vocals and a bit of percussion and acoustic guitar. Contrary to what one might expect (given the bands later releases), it does not sound cheesy, but beautiful and sad. Trolltaar is definitely worth getting if you are interested in atmospheric Black Metal.