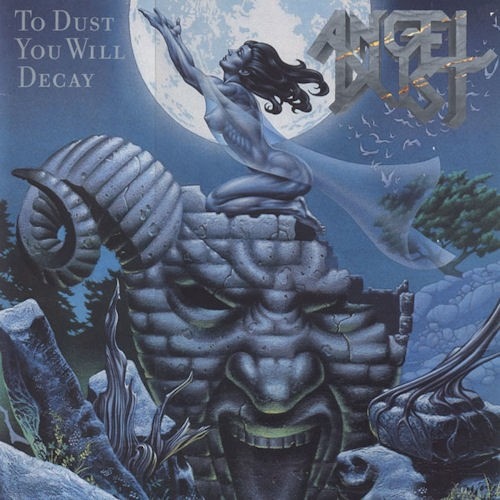 Angel Dust -To Dust You Will Decay lp

When we think of German speed/power metal, what usually comes to mind? Helloween, Blind Guardian, etc…sound familiar? Take Walls of Jericho and the Keeper albums by Helloween, Battalions of Fear by Blind Guardian, maybe a great thrash album like Vendetta’s Go and Live…. Stay and Die, and combine them into the ultimate power/thrash album! Yes, the keyboard-driven power metal band you might know from the 90s and early 2000s wasn’t always that laid back (if you want to call it that!). Angel Dust didn’t hold back in the 80s and especially not on this album! It has it’s super thrashy tracks as well as it’s power metal classics scattered all throughout this masterpiece! To Dust You Will Decay was the follow up to the pure speed metal debut Into the Dark Past. These two albums both share their moments of speed metal glory, but this sophomore release was way more melodic and had a new singer by the name of S.L. Coe. Coe had also sang for another great power/speed metal band called Scanner on their second album Terminal Earth. To Dust You Will Decay pushes the limits in every way possible here and really shows what kind of amazing singer S.L. Coe actually was! Terminal Earth was a little more straight forward than this. Imagine some of the most tightest riffs imaginable in the genre, crazy shredding solos, super memorable and slightly epic melodies all coming together to challenge the best of the best! This album is so monstrous that I wouldn’t be surprised if Kai Hansen himself was awed by it’s greatness! For all musicians out there, some of these riffs will make your head spin. If you’re a guitarist and can pull off the ultra complex thrash numbers like The King and the title track To Dust You Will Decay than you are officially great. Helloween and Blind Guardian both show some top notch talents, but this takes it above and beyond. Now let’s talk about the songs themselves and the overall production of the album. There are 9 original tracks and 2 bonus tracks called Flight to Russia and Dawn of the End with a grand total of 11 tracks. The bonus tracks are every bit as great as the rest of the album so they fit like a glove! The production couldn’t be better also! You can really tell it is a product of the late 80s with much reverb unlike the more dry debut. I think the reverb sounds great here giving the songs more atmosphere. Everything on this album also sounds very clear, which is really great because there are so many notes and runs crammed everywhere! This album definitely deserves a perfect score, for it doesn’t lack in anything! The songwriting is topnotch with every song being entertaining. In all fairness it’s way more entertaining than the debut and personally I wish they would have done more like this… But ah well, Border of Reality was a great comeback anyway, but still doesn’t compare to this epic masterpiece! Every track is a highlight! Bottom line… get this album now!! If you like Helloween, Scanner, early Blind Guardian, etc. you can’t go wrong!