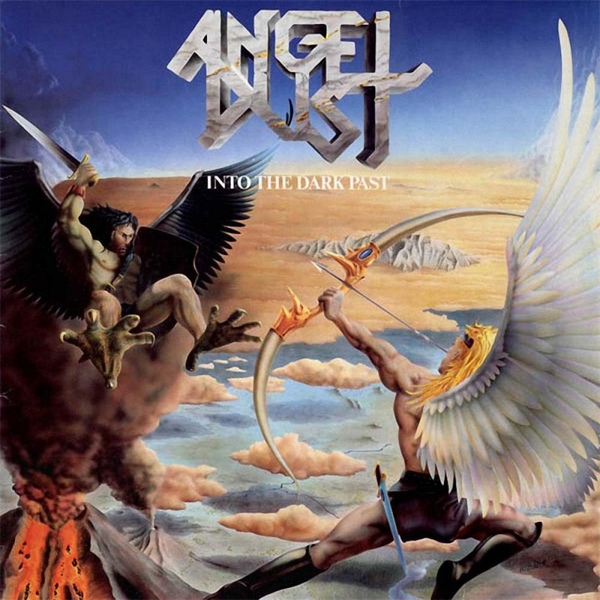 Angel Dust -Into The Dark Past lp

There’s not a whole lot of talk about the first incarnation of Angel Dust outside of the most devoted of early German thrash metal adherents, mostly due to the lack of any reissue to introduce said albums to the current generation. In wake of the revival of interest in thrash metal of the mid 80s variety, this could be seen as a bit perplexing, though most younger bands of today take their cues from either the Bay Area scene of the Teutonic Trio, of which this era of the band doesn’t quite fall into either yet has some elements of both in their earliest stages. Thus relegated to the realm of obscurity, Into The Dark Past has become one of the most rare gems in the world of original vinyl and audio cassette recordings. The common ground that this album shares with other releases is a bit less obvious than their locale would suggest, and boasts a bit more of a direct, mainline early Metallica and Exodus influence, not all that far off from the contemporary Tankard debut Zombie Attack. But at the same time, this album doesn’t go into full out party mode, and definitely takes a few hints from the more serious side of the German metal paradigm. It’s character of sound involves an outright avoidance of overt tradition the way Talon and Tyran Pace had been exploring up to this point, and actually leans a bit more in a thrashing direction than a straight up speed metal one as some might suggest. Nothing on here gets quite as aggressive and heavy as Slayers Chemical Warfare or even Metallica’s brief lean towards the extreme in Fight Fire With Fire, but particularly when listening to Atomic Roar and Marching For Revenge is definitely reminiscent of several factors at play on Show No Mercy and Kill Em All. Granted, at the same time that this album cooks away and reminds of why the mid 80s was an incredible period for the development of faster metal sub-genres, there are some subtle hints at Angel Dust moving towards the place that they ended up in come 1998 when they came back into the picture. Perhaps the most overt example is the slower parts of The Gambler which definitely show a more mainline heavy metal character that is indicative of several bands in the Accept school. Victims Of Madness is a similar story and features a main riff set that comes off as a faster version of Dios We Rock and a vocal display out of guitarist Romme Keymer that has a few more high pitched screams that average for the album. What actually keeps this album somewhat in line with the broader German thrash sound is Keymer’s mostly harsher yelling vocal sound which is somewhat reminiscent of Schmier, though also in line with Tom Araya’s sound on the first couple of Slayer releases. While this album is among the more difficult to track down these days from the mid 80s German scene, it’s well worth the effort. It’s not quite the cream of the 1986 crop and easily bends the knee to the likes of Pleasure To Kill and Eternal Devastation, which were a bit edgier and overtly trailblazing the style rather than reaffirming and only slight expanding what had been established a year prior by Agent Steel and Iron Angel. But it’s a high quality album from a band that is less known for its thrashing madness than for its more mainline metal friendly progressive power metal style nowadays, but does a solid job of it.

Track listing:
1. Into the Dark Past
2. I’ll Come Back
3. Legions of Destruction
4. Gambler
5. Fighters Return
6. Atomic Roar
7. Victims of Madness
8. Marching for Revenge