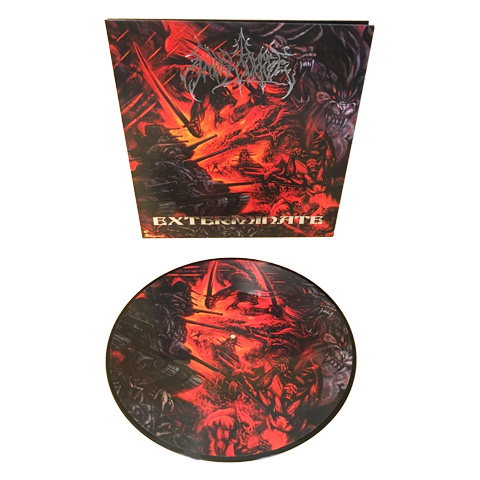 Angelcorpse call to arms with Exterminate an album that mixes classical archaic death metal in the vein of Altars of Madness-era Morbid Angel, speed/black/thrash metal of early Sodom, a bit of pure black metal (I always thought they had a certain Marduk ring about them, they certainly share the speed levels!) and a little grind inspiration for that extra bit of chaos that mainman Pete Helmkamp probably brought on from his former band, the death/black/grind cult act Order From Chaos. The result is chaotic to say the least. The drums of John Longstreth are frenzied beatings that seem to balance on the edge between control and chaos. He’s blasting left and right with awe inspiring speed, but his chaotic fills and general skill ensure that no one is left bored. Guitarists Bill Taylor and core member Gene Palubicki lay down some of the best riffs for a long time. These are the red threads in the fire storm that is Exterminate. It is a futile job to point out the best riffs on the album since the quality is so frighteningly high all around. Today, more than 10 years after its release in 1998, Exterminate continues to impress. The uncompromising work that has gone into all aspects of the album – artwork, lyrics, production and most importantly, the music – has really paid off.

Track listing:
1. Christhammer
2. Wartorn
3. Into The Storm Of Steel
4. Phallelujah
5. Reap The Whirlwind
6. That Which Lies Upon
7. Embrace
8. Sons Of Vengeance