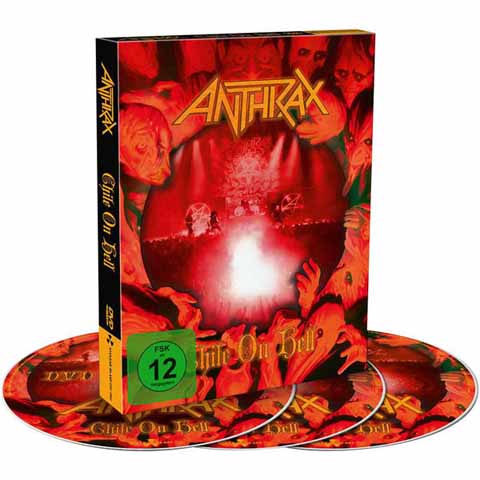 One of Metals most important acts, Anthrax,are celebrating three decades since their 1984 debut Fistful Of Metal , in what has been an unstoppable career. Anthrax not only continue to tour the globe relentlessly – including being part of The Big 4, alongside Megadeth, Metallica and new labelmates Slayer – they even find themselves guest-starring in an episode of famous US TV show Married…with Children. The Chile On Hell, a live-in-concert featuring footage filmed and recorded at the Teatro Caupolican in Santiago, Chile on May 10, 2013. For the Chile On Hell show Anthrax performed an extended set that featured songs from the band’s entire back-catalogue. So get ready to mosh in the privacy of your own home with multiple Grammy-nominated thrash masters Anthrax. The bands current incarnation includes vocalist Joey Belladonna, bassist Frank Bello, drummer Charlie Benante and last remaining founding member and guitarist Scott Ian. Shadows Fall guitarist Jon Donais, who has been touring with Anthrax since Rob Caggiano’s departure in January 2013, handled the lead-guitar parts at the Santiago show. Santiago was the perfect place to film the show for this, said drummer Charlie Benante. When we’d played there in the past, we’d finish our set, play our encore and go back to the dressing room. But every time, the fans would continue to scream and cheer and clap. I mean, they went on and on, they wouldn’t stop. Why wouldn’t we want to film in front of an audience like that. Plus, Benante continued, the time was right to do this release… We wanted to finish on a high note. We didn’t want to look back and regret that we didn’t record the live show.