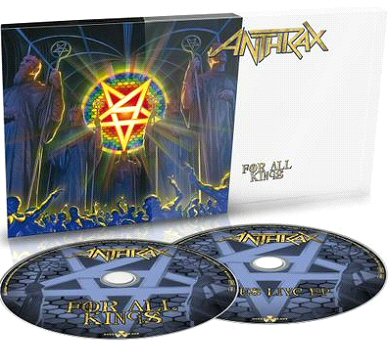 Anthrax -For All Kings dcd

Digipack with slipcase and bonus cd

Scott Ian has the following to say about the 2016 album For All Kings. The meaning, to me, for this title is that everybody can be a king. Everybody can have control over their own lives, control over their destiny, just by growing up and becoming a responsible human being. I’m not necessarily saying that being a king is being the boss in your relationship, or any relationship for that matter. A king of yourself is what I mean. Taking responsibility and ownership for your own shit is basically what it means to me. Its the most metal record we have made in a long, long time! It’s Anthrax, but with extra metal. [Laughs] There is way more thrashy stuff and heavy stuff on this record. Also, it’s just way more riff-heavy, if you know what I mean. It’s way more proggy! [Laughs] I’m just kidding; there is no prog on this album! Actually that was the original title of the album. We were just gonna call it “Prog” and have a circle with a line through it. [Laughs] I like prog. I’m just fucking with you! Seriously, man, all jokes aside, it’s not a jazz album or anything less than what our fans and we collectively wanted to make. It’s a very heavy fucking record, and that’s what we wanted to achieve.

Track listing:
1. You Gotta Believe
2. Monster At The End
3. For All Kings
4. Breathing Lightning
5. Suzerain
6. Evil Twin
7. Blood Eagle Wings
8. Defend Avenge
9. All Of Them Thieves
10. This Battle Chose Us
11. Zero Tolerance