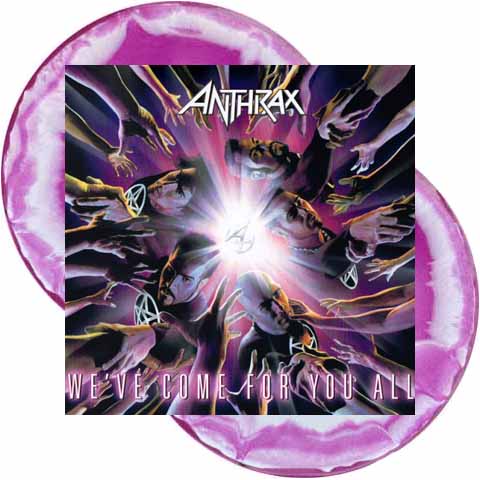 Anthrax -Weve Come For You All dlp [purple/white]

The cover art of Anthrax’s We’ve Come For You All depicts the band gripping a circle of hands, as a beam of light shines on them from behind. It can be taken two ways. Vocalist John Bush, drummer Charlie Benante, bassist Frank Bello, rhythm guitarist Scott Ian, and new lead guitarist Rob Caggiano might be pulling their fans onto an imaginary stage, to join them in the limelight. But those fans might also be pulling them back from the depths of label-derived acrimony that has plagued Anthrax in the years since 1995s Stomp 442 and 1998s Volume 8: The Threat Is Real. Since then, metal in all its forms rose to the top of the charts, and hybrids of rap-rock and nu-metal — genres built on what Anthrax helped create — came to dominate heavy alternative. With new personnel, a new label, and the survival of a PR firestorm in the wake of the anthrax scare, all the pieces were in place for a comeback. Instead, Anthrax seems to have designed the pile-driving thrash and carefree rock forays of We’ve Come for You All to say one thing: we never left. While Anthrax famously kick-started the rap-metal genre with its Public Enemy collaboration on “Bring the Noise,” it largely sidesteps the sound on We’ve Come for You All, opting instead for a volatile mix of thrash and conventional metal, anchored by the gruff vocals of Bush. After a brief intro, “What Doesn’t Die” drops, with Bush sounding positively furious as he screams “You cannot kill what doesn’t die.” As the band cranks out a vintage thrash rhythm, Caggiano introduces himself with the first of many blistering solos. And if you’re a fan of the double bass drum pedals, Benante’s double-time outro is like a clinic for metal drumming. E-Town Concrete’s Anthony Martini’s animalistic roar begins the seething “Refuse to be Denied,” which continues the album’s theme of resolve. While the record does nod to modern production techniques (courtesy of Caggiano’s Scrap 60 collective) and expands melodically, the instrumentation and rage that have always been Anthrax’s hallmarks are for the most part present and accounted for, undiluted by forays into marginalized, corporatized active rock that might have sold some records, but wouldn’t have won over any real fans. Unfortunately, the band chose “Safe at Home” — one of the album’s weakest tracks — as We’ve Come for You All’s single. Bearing a striking resemblance to Metallica’s “Sad But True,” the song opts for a pleading chorus that is the record’s only straightforward nod to the anthemic post-grunge that has taken over metal in recent years. This misstep aside, We’ve Come for You All is a typical thrash metal album, in an age where such a thing no longer exists. The introspective acoustic guitar duet of “Anyplace But Here” gives way to a muscular Scott Ian riff that gives way to an effective nod to East Coast hardcore during the chorus. Though a bombastic overture slows things down (“There’s ways to kill a giant”? Come on…), the song recovers with another screed from Caggiano. Though Pantera guitarist Dimebag Darrell stops by for the strutting ’70s rock groove of “Cadillac Rock Box,” the album features a more unlikely guest star on “Taking the Music Back.” As Bush gives the lyrical finger to the record industry, Roger Daltrey appears to duet with him on the chorus and add a few trademark growls of his own. After another brief interlude, We’ve Come for You All makes its final descent with “Think About an End” and the closing title track. Once again, Bush’s vocals present the band as a survivor, a unit that has always been supported by itself and its fans. At the same time, “Think” seems to lash out at Christianity. But it’s strange. The song name-checks Rage Against the Machine in its chorus, uses the phrase “killing in the name” in its lyrics, and even bears a resemblance to the hard-hitting grooves of Rage’s early material. It’s unclear whether this reflects a positive or negative relationship between the two groups. Nevertheless, the song’s meaty, churning groove slides right into the final title track. “W.C.F.Y.A.”‘s lyrics revel in heavy metal cliché (“The wrecking ball is here/Your chest contains no treasure”; “Patience starts to bleed/Increasing enmity/It’s time to let the bullets fly”). But what is this band but a heavy metal survivor? If anyone can rely on the genre’s boilerplate, it’s Anthrax. A particularly nice touch is the fadeout on the song’s final, titular words, as if they’re still coming, for you, out there somewhere in the night. The band is sure to win back, win over, and alienate individual parts of its audience with We’ve Come for You All. But it’s effectively reestablished itself not by embracing the recent homogenization of heavy music, but by grafting its more marketable elements onto its tried and true thrash.