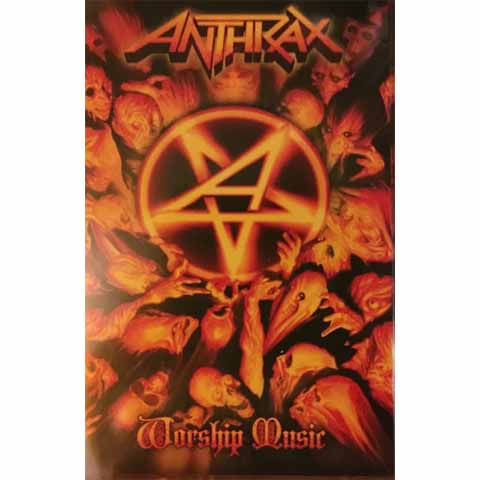 Not only is Worship Music Anthrax’s first studio release in eight years, but the album marks the return of vocalist Joey Belladonna, whose last studio work with the band was 1990’s Persistence of Time. Belladonna is now firmly back in the Anthrax line-up with drummer Charlie Benante, guitarists Scott Ian and Robb Caggiano, and bassist Frank Bello.’Getting Joey back in as our full-time, permanent singer solidified us as a unit like we hadn’t been in years,’ said Ian. ‘All of use were on the same page creatively, working together, writing together, and becoming a band again.’ ‘I get goosebumps listening to the new music, ‘Benante admitted. ‘Scott and Rob’s guitars are absolutely on fire, Frankie kicks butts on bass, and hearing Joey sing, well, the band sounds like Anthrax-Joey’s back and it’s great.’ The 11-track Worship Music was produced by Anthrax, Rob Caggiano and Jay Ruston and recorded over a four year period at studios in NY, LA and Chicago. Belladonna’s return to the band prompted some of the songs originally recorded to be re-crafted with fresh lyrics or tweaked to better suit his overall vibe and energy. Some of the songs were completely replaced with brand-new songs and, of course, all have Belladonna’s inimitable vocal stamp on them. ‘I’m very happy with the record. It sounds like Anthrax. There are some interesting twists and turns on it, and plenty of tunes for fans to get their fingers on. I felt very comfortable working with Jay Ruston, and I think everyone brought to the table what they needed to. Now it’s time for the fans to listen and get what they’ve been waiting for. I’ll tell you, I’m really excited.’ With worldwide sales in excess of 10million, 2011 sees Anthrax celebrating its 30th year as a band. Over those three decades, Anthrax has received multiple Gold and Platinum albums, multiple Grammy nominations, and a host of other accolades from the media, industry and fans.