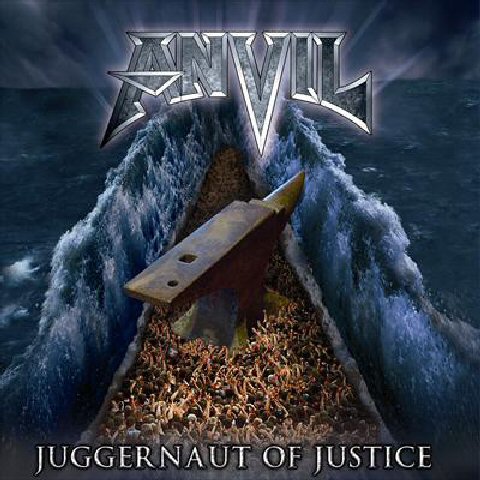 If goodwill alone careers made, then lovable heavy metal losers, Anvil, would be topping charts across the globe, headlining stadiums, and rolling joints with $100 bills these days, following the massive acclaim achieved by their profile-reviving documentary, Anvil! The Story of Anvil. Indeed, the cover art chosen for the group’s fourteenth studio album, Juggernaut of Justice, depicts a giant representation of their namesake parting the seas like Moses himself, and suggesting that nothing can stop the band now that they’re on a mission from God. But, all messianic posturing aside, Juggernaut of Justice boasts nothing more ambitious than the familiar mixture of trad, speed, and power metal that the Canadians have been peddling almost without interruption for 30 years, albeit garnished with one of the best production jobs of their entire career. Guitarist Steve “Lips” Kudlow, drummer Robb Reiner, and bassist Glen Gyorffy takes us down that familiar road, so no one can accuse the group of selling out, post-documentary fame. This is an album that all the old fans should love and even if it fail to take them a step up on the ladder or not it still deserves respect. The band is as true and entertaining as always and who would want them any other way?