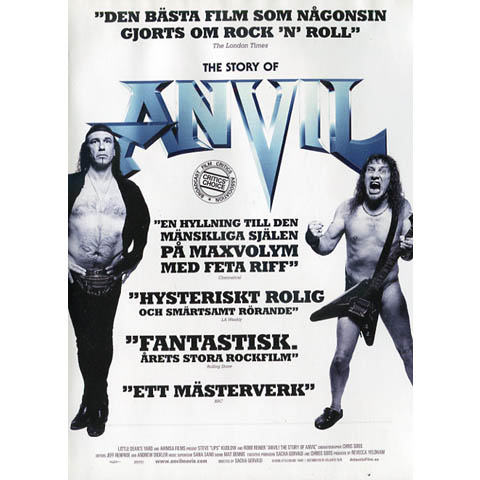 Anvil -The Story Of Anvil dvd

Reduced price due to cover being a bit wavy

Is Anvil the real Spinal Tap? That’s a label that could be applied to any number of hapless hard rock bands, but there’s enough evidence in Anvil: The Story of Anvil to suggest that these guys may have, uh, tapped into the motherlode. The parallels are many, including getting lost on the way to a gig, playing before 174 people in a 10,000 capacity venue (in Transylvania, yet), inept management, ridiculous songs (even Nigel Tufnel and David St. Hubbins couldn’t match “Thumb Hang,” an Anvil tune about the Spanish Inquisition) heck, they even visit (the real) Stonehenge. But dig deeper and you’ll find some real heart in this 2007 documentary. Two hearts, actually–the ones belonging to singer-guitarist Steve “Lips” Kudlow and drummer Robb Reiner (remove one “b” and you’ve got the director of This Is Spinal Tap). These two were there when the Canadian metal band formed in the early ’80s and went on to share festival stages with the likes of Bon Jovi and Whitesnake. Now, a quarter century later (a new bassist and guitarist joined in the ’90s), Reiner and Kudlow are in their fifties, living in Toronto with wives, kids, and menial jobs. But they still haven’t given up their undying belief that with a new album (their thirteenth) and couple of breaks, they will be rock stars. It doesn’t happen on a mostly disastrous European tour organized by a well-meaning but inexperienced fan. It doesn’t happen when they reunite with British producer Chris Tsangarides (Black Sabbath, Thin Lizzy) but find little interest in the new recording. But Kudlow, despite some bleak moments, is remarkably resilient (of the tour, he says, “Things went drastically wrong. But at least there was a tour for them to go wrong on”). And while it’s a sad truth that Anvil just isn’t that good–they’re nowhere near the level of some of the bands they inspired, like Anthrax and Metallica–only the hardest of heart will resist rooting for them. Bonus material includes deleted scenes and commentary by director (and former roadie) Sacha Gervasi.

Bonus material:
1. Deleted Scenes
2. This Feels Good-interview with band
3. Where Are They Now-interview with the original band members
4. Interview With Lars Ulrich