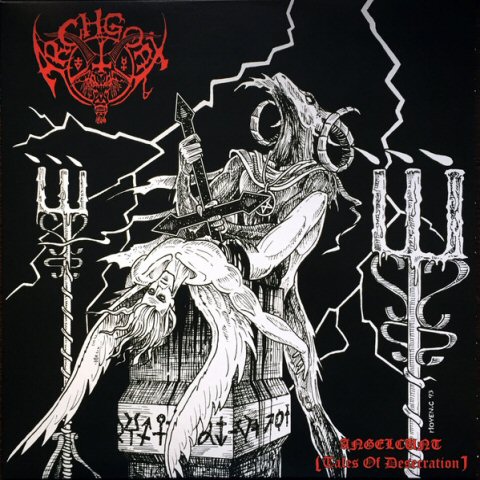 The first EP from one of the biggest cult names of early black metal, Finland’s Archgoat. What strikes you first on Angelcust is the short length. But where most bands struggle to create variation this EP doesn’t. Most of the songs are quite similar to grind, in that they are very short and fast. The death influence is fairly prominent in the drumming as well as the vocals, as well as in the heaviness. Make no mistake; this EP is crushing at times. In each of the song there is a (for lack of a better word,) hook of sorts. Dont worry, they arent catchy. Catchy stopped and died a few miles away from this putrid corpse. The bands sound is best described as filthy. The vocals are guttural and unintelligible and the production is raw and the riffs are brutal. Overall, this is a great release. It packs a ridiculous amount of killer riffs and hooks, featuring more variety than most full length albums do. It never gets boring, both due to the variation and due to the incredibly short run time. The albums only flaw is that its over by the time youre truly getting into it.