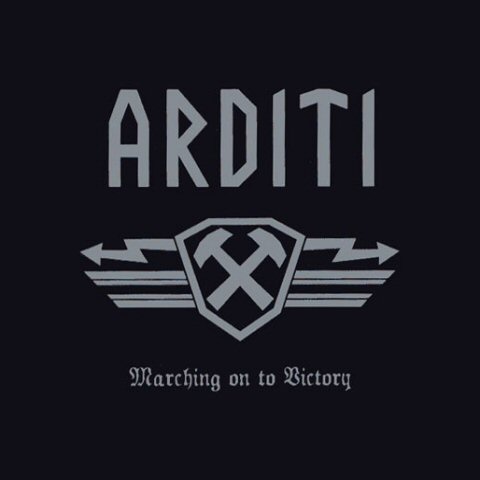 Arditi ‎–Marching On To Victory cd

Arditi is a Swedish martial industrial and neoclassical band. It consists of Henry Möller (Puissance and Leidungr) and Mårten Björkman from black metal bands Algaion and Octinomos. Arditi formed in 2001, deriving their name from the early Italian special forces unit known as the Arditi. They released their first full-length album, Marching On To Victory in 2003. Their debut album is not an album for peaceful minds. Arditi has much in common with Puissance. Arditi sounds even less subtle though and more belligerent and politically incorrect. An overwhelming dark and bombastic sound, with threatening Wagnerian orchestral soundscapes, classical and choral layers, marching drums, noisy industrial loops, war samples, a strong militant atmosphere. Most tracks are bombastic, with a few more tranquil pieces. The title track, “Marching On To Victory” deserves a special mention. This is an upbeat tune with whistling, tinny military drums (which sound as if they’re taken straight from a film soundtrack), a solitary electronic drum and male voices echo over. This is a brilliant track – a real shame it’s the shortest on the album at only 2:20. It actually reminds me of the track “Evolution” on Puissance’s “Back in Control” album but somewhat darker and minus the vocals. The tracks “Unity of Blood” and “Holy Order” are more dark ambient forays but just as powerful. All in all, this is a really worthwhile album to get your hands on. Though far from original, fans of heavy martial orchestral music will be pleased by this one.