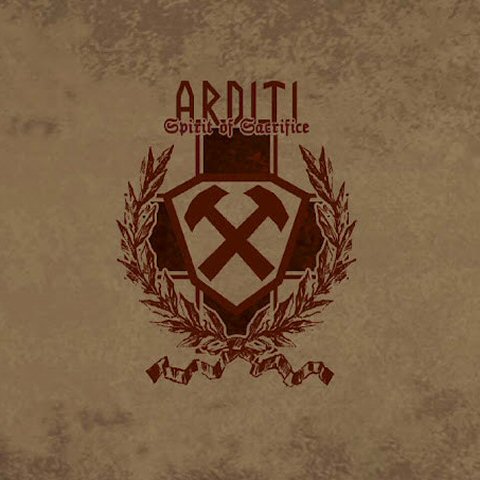 2011 re-issue with one bonus track

Linkoping, Sweden act Arditi’s second album. Arditi unites the talents of H.Muller who is widely known for his participation in Puissance and the unlikely collaboration of M. Bjorkman known for his work as the lead singer of the black metal band Algaion. Spirit Of Sacrifice follows Arditi’s first full length release Marching On To Victory. As impressive as these earlier releases were nothing quite prepares one for the power and glory of this album. Spirit Of Sacrifice sees Arditi come to full maturity as the band masters their sound and delivers an uncompromising album of martial anthems. Arditi has entered the arena of martial orchestral music like a lion amidst the lambs. Producing powerful orchestral music accented by thundering drums and strenuous synths Arditi has harnessed all the emotions, fears, hopes, and losses of armed resistance and war. Following in the tradition of Toroidh, In Slaughter Natives, Sophia, and Der Blutharsch Arditi satisfies our cravings within the post industrial music arena for music that intelligently and artistically explores the phenomena of war and self sacrifice. Many critics think such themes and music should silently endure censorship. I salute Arditi for their courage and persistence in resisting being silenced by fascist left wing censors who strive to control freedom of expression under the guise of protecting the vulnerable music lover. The music of Arditi is brilliant and original. Fans of martial orchestral will be hard pressed to find an act that can eclipse the vision of Arditi. It’s easy to pound on drums and belch forth lamenting synth tracks. Yet to make such efforts worthwhile and potent one must harness talent and vision. With the release of Spirit of Sacrifice Arditi has claimed their place amidst the ranks of Sophia and Tordoih. Spirit of Sacrifice is a sobering album of martial hymns that is sure to move the heart and soul of even the fiercest critic. If you are looking for music that translates the realities of war and conflict into art and music then you need look no further than Arditi.