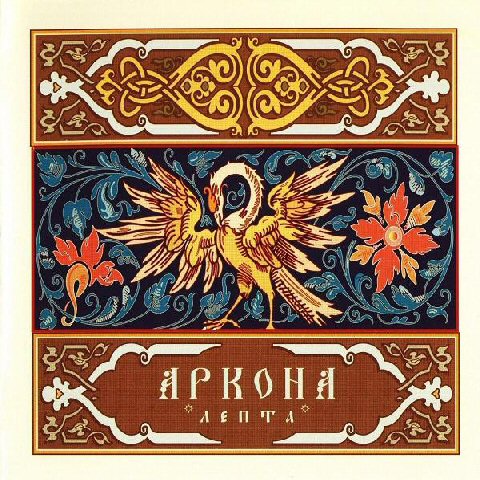 Arkona is a five-piece Russian folk/pagan metal band formed in Moscow back in 2002. They released their debut album Vozrozhdenie (Revival in English) in 2004 and the follow up ‘Lepta’ was released just over half a year after the band’s debut. Lepta does not let up on their brand of epic folk and pagan metal. Nonetheless, the minor flaws that some listeners may have found in ‘Vozrozhdeniye’ will undoubtedly come up again. This isn’t to say that Arkona hasn’t improved on their musical formula, just that they adapted to what they thought would work, and applied it to a more melodic albeit much shorter album in ‘Lepta’. The same themes and ideas found within the band’s debut are in fact generated here. Masha once again uses her cultural and historical knowledge of Russia to produce some extremely interesting content. The tracks have an epic, layered quality and are literally bursting to the brim with a bombastic mix of instruments. The riffs are generally heavy, fairly clean & powerfully driven with some great uplifting moments and soaring solos. The addition of Folk instruments such as flutes, accordion, tambourine and what sounds like an Orchestral style synth/keyboard adds to the generally complex and outstanding compositions. The drums have a slightly Black Metal edge as they maintain a fast tempo throughout and include a few carefully placed blastbeats. The highlight of this release has to be the vocals. I have never warmed too much to female vocals as they can sound clichéd & lacking in individuality. Masha “Scream” performs her vocal pieces the way it should be done. One of the things that makes her stand apart from other female vocalists, is her incredible vocal range which she performs with an effortless ease. There is a totally crazy change from gruff growls, to clean folk singing, banshee screams and pagan chanting and her voice never falters in strength. At times Masha’s gravely tones are combined with rough male vocals and heroic cries that are complimentary to her voice. The whole experience is maximum entertainment and full on grandiose theatre. Just like the best Power Metal acts, but without all the pomp and pretentiousness. Unlike other bands in this vein, Arkona maintain a strong character and their songs will imprint on your memory. It is impossible to compare such an eccentric band with others directly, though I would say this band would appeal to those who follow Slavic bands such as Kroda, Velimor and Oprich who use similar instrumentation/song-writing techniques. Bands such as Varyag, Temnozor, Tumulus, Triglav, Nokturnal Mortum and Krynitza would also sit nicely next to Arkona in any cd collection. It may not appeal at first, but in time Arkona grows on you and you will be well and truly under the spell of “Lepta”.