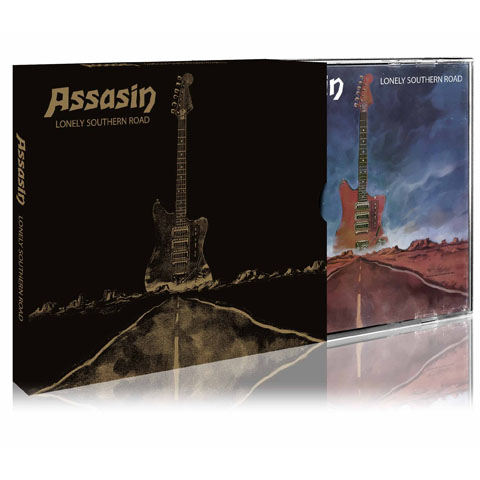 Formed in 1979, Assasin quite remarkably kept pretty much the same line-up until their demise in 1992. After a false start the band settled down with Tony Barton and his brother Ian handling rhythm guitar / backing vocals and bass / backing vocals respectively, Karl Chester on lead guitar and Steve Walker on drums. They rehearsed continually and almost religiously, eventually came to the attention of Ebony Records who in 1982 were looking for bands to appear on their upcoming debut release, the ‘Metal Fatigue’ compilation. Ebony gave the band the opportunity to appear on the compilation, and at the label’s Hull studios Assasin recorded two tracks, one of which, ‘Lonely Southern Road’ not only made the cut but went on to achieve notoriety as one of the record’s strongest tracks. Although proud of the fact that they didn’t rely on covers to make a set – all their material was written by the Barton brothers – Assasin unfortunately recorded few songs professionally in their lifetime. ‘Lonely Southern Road’ features five real New Wave Of British Heavy Metal classics from Tony Barton’s personal archive, including the ‘Metal Fatigue’ cut which gives the release its title, as well as an exclusive interview with Tony Barton himself.