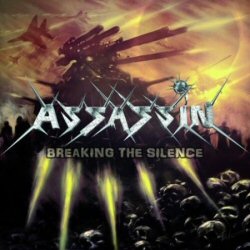 German thrash metal produced by Harris Johns (Voivod/Kreator/Sodom). Very similar sounding to later day Sodom Assassin’s-Breaking The Silence is 11 slabs of fast and furious no frills thrash. Tailor made for fans of At War, Sodom and Tankard Breaking The Silence is a worthwhile addition in the field of great German thrash metal releases. I don’t know if it’s something in the beer or what but Germany continues to be a source for some of the best thrash metal you can find. Assassin has a great sense of humor going on with tracks like “I Like Cola” but it’s on tracks like “Judas” and “Kill Or Be Killed” that they really shine. That venom and rage works wonders for them. It’s refreshing to hear the band return to their roots after some sub par releases that were more crossover in nature. Breaking The Silence finds the band returning to the sounds of 1987’s The Upcoming Terror. In other words less hardcore and more thrash. Heavy thrash. Assassin might not ever be revered the way Kreater,Destruction and Sodom are in regards to German thrash. It would be hard for any band to live up to the greatness of those three. But give Assassin it’s due for playing honest to goodness thrash that doesn’t try to be trendy or slick. These guys are blue collar/blue jean thrashers. Breaking The Silence is highly recommended!