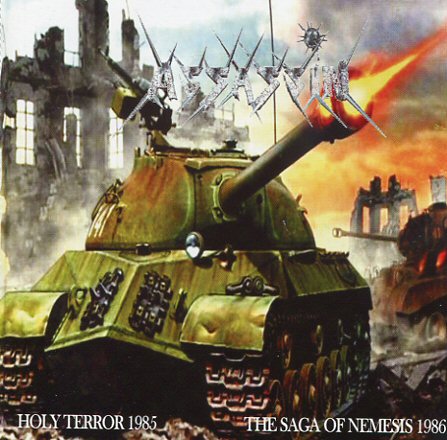 Reduced price due to cd being ex-

Formed as early as 1982 by two metal heads that shared their love for new bands like Venom, Metallica and Slayer. They started out under the name of Satanica but without any money to buy the material they needed so much time were spent at music stores to ‘test’ guitars. A few years later the first line up had been set, guitars had been bought and the band had renamed themselves Assassin. Now they had taken over Warlocks old rehearsal place just a few meters from where bands like Deathrow, Genocide, Warrant and Sadist rehearsed. Back then it was like a huge family and the they ran a small metal community, the DDT (Dusseldorf Death Thrasher). For their first concert the band just opened the doors to the rehearsal place and let people in. In August of 1985 the band released their first demo, Holy Terror. They managed to ship 500 copies worldwide within the first years. A first record contract were offered by a record label from Waukegan Illinois but the band decided to wait a little. Then in April of 1986 they recorded their second demo The Saga Of Nemesis in just three days. This second demo had much better sound quality, something they could thank Rudi Toni Graf, who produced the demo, for. 600-700 copies with this hyperspeed music were spread. In September of 1986 Steamhammer offered the band a record deal and the rest is thrash metal history. This limited album features both these demos in their original sound together with a the live cassette the band recorded at The Kupferdachle in Pforzheim Germany on the 23rd of May 1987. So if you love your thrash metal raw then look no further. This is the early sage of Assassin