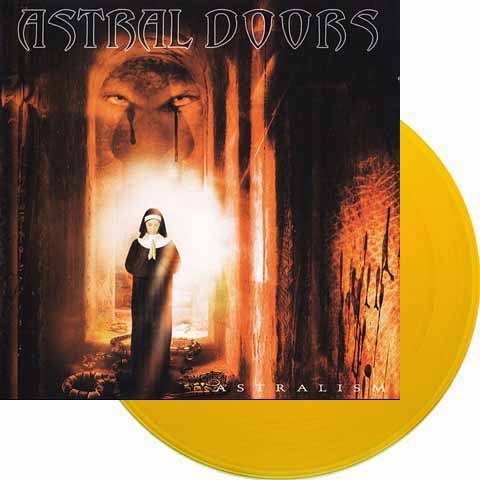 2021 release on yellow vinyl with one bonus track

In early 2002, Swedish guitarist Joachim Nordlund and drummer Johan Lindstedt teamed up and decided to write some metal songs in the spirit of the old heroes Rainbow, Dio, Sabbath and Deep Purple. Later Nils Patrik Johansson on vocals, Keyboarder Jocke Roberg joined the band and Martin was asked to fill in on the bass. However, in 2003 Martin moved onto the guitar to provide the band with a real dual guitar attack sound and into the line-up came Mika Itaranta as bass player. Astral Doors’ sound can be described accurately and succinctly; Dio-era Rainbow on steriods. It’s old school metal with a modern sound. The riffage has a bit of that old Blackmore tone to it and the rhythm section is super-solid. The icing on the cake is the godly singing of Nils Patrik Johannson, whose Dio-esque vocals are more powerful and passionate than RJD himself (yes, he’s that amazing). ‘Astralism’ is definitely a strong album in the Astral Doors catalogue