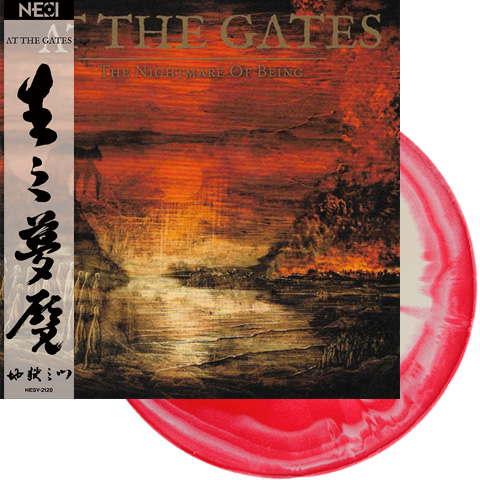 At The Gates ‎–The Nightmare Of Being lp [china]

Undisputed masters of Swedish death metal, At The Gates have always been a fearless force for creative thinking. Formed in Gothenburg in 1990, the band’s highly influential take on the burgeoning extreme metal formula swiftly thrust them to the forefront of the underground. A second chapter began in earnest in 2008, with a series of acclaimed reunion shows, before At The Gates made a full-scale comeback to action with fourth album At War With Reality in 2014: a sophisticated and intricate return to top form that also introduced numerous new weapons into the Swedes’ armoury. Faster and nastier than its predecessor, 2018’s To Drink From The Night Itself provided further proof that the band’s 21st century incarnation was easily outstripping the musical achievements of the early years, and subsequent live shows were as intense and celebratory as any they have experienced. Fast forward to 2021, and At The Gates are poised to release what can only be described as the finest album of their careers to date. A concept album that explores the dark revelations contained in pessimist philosophy, The Nightmare Of Being. The album was mixed and produced with Jens Bogren at Fascination Street Studios (Amon Amarth, Opeth, Kreator) and the featured 10 songs showcase the band at their most elaborated, striking and compelling!

Track list:
1. Spectre Of Extinction
2. The Paradox
3. The Nightmare Of Being
4. Garden Of Cyrus
5. Touched By The White Hands Of Death
6. The Fall Into Time
7. Cult Of Salvation
8. The Abstract Enthroned
9. Cosmic Pessimism
10. Eternal Winter Of Reason