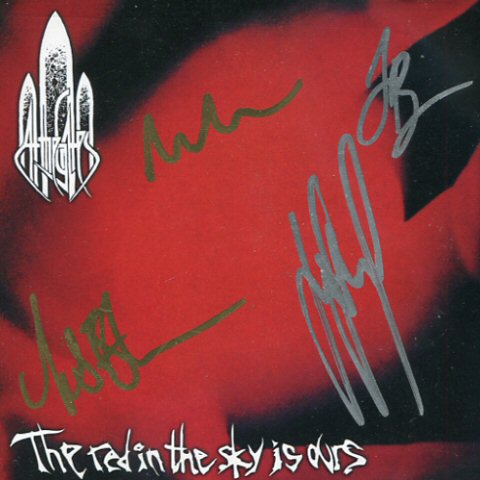 At the Gates rose from the ashes of Grotesque, a Satanic Swedish Black / Death Metal band from the late 80s. With the ‘Gardens of Grief‘ E.P. the band already showed a definitive shift from the sound of Grotesque and the bottom-heavy sound was more related to other bands of the time. The vocals were much deeper, for the most part, but the release showed promise. ‘The Red In the Sky Is Ours’ is the debut full-length from Sweden’s At the Gates. This is truly a masterpiece of an album, and far surpasses anything the band would go on to release. The spirit of Grotesque lives on here, but in much different form. This is not typical Swedish Death Metal, at all. It is actually much more reminiscent of early Burzum. In many aspects, this album possesses a similar feel and the structures are quite more complicated than most Death Metal. However, it does feature some of the rhythmic structures of that subgenre. Vocally, Tomas Lindberg’s style is a terrible shriek, that fits alongside that of Varg Vikernes. It works brilliantly with the hauntingly miserable melodies of this album. It sounds much less controlled than on later releases and is one of the best aspects of this album. To many, this album is an impenetrable wall of noise, a typical debut album in which the then-inexperienced band couldn’t realize their songwriting ideas fully, where the songs did not have the strength or identity to stand out or capture the listener’s attention for too long. A whole lot of people dismiss this as At The Gates weakest album and leave it to gather dust in the record rack while listening to ‘Slaughter Of The Soul’ for the umpteenth time. Well its their loss. To me, the music and lyrics contained on this album represent At The Gates highest achievements, songs with an otherworldly, pitch black atmosphere and at times unsettling lyrics screamed with unparalleled emotion by Tomas Lindberg, who at the time had not developed his raspy shriek fully yet, but relied on singing in a lower pitch and sometimes, intentionally or not, allowing his voice to crack slightly to reveal the desperate howl beneath the raspy surface. The songs are highly technical, and the dozens of riffs in any given song glued together with unorthodox song structures, drum patterns and time signatures contribute to the considerable difficulty most—especially ‘Slaughter Of The Soul’ nuts—will have in attempting to comprehend the album fully. While ‘The Red In The Sky Is Ours’ will demand some time and effort put into understanding it, what it gives in return is ten times greater. This is a true classic, and At The Gates greatest and most significant contribution to metal music.

Track listing:
1. Red In The Sky Is Ours / The Season To Come
2. Kingdom Gone
3. Through Gardens Of Grief
4. Within
5. Windows
6. Claws Of Laughter Dead
7. Neverwhere
8. The Scar
9. Night Comes, Blood Black
10. City Of Screaming Statues
11. All Life Ends-live
12. Kingdom Gone-live
13. Ever-Opening Flower-demo